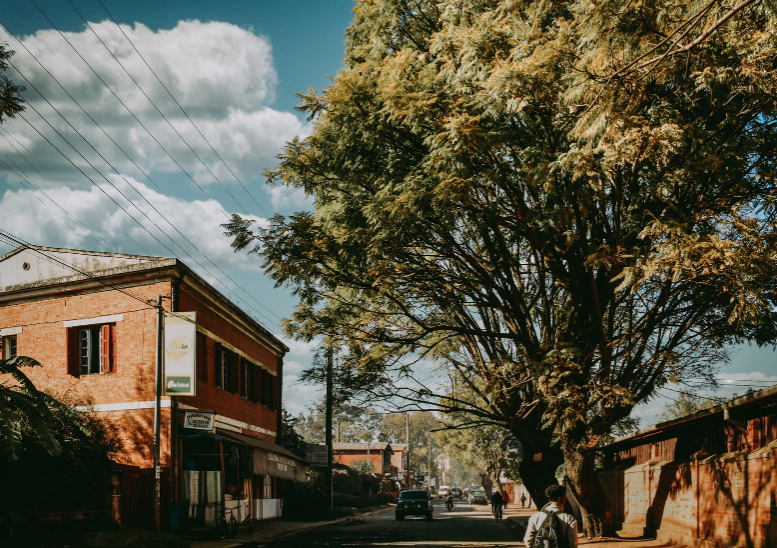 The other tree species which make the happiness of the visitors who arrive in Madagascar is the Ravinala, or “the traveler’s tree”. This species, currently widespread in many countries, originate from the big island where it shows its full splendor and beauty. Currently, the traveler’s tree takes over cleared patch of land and secondary or primary forest sadly destroyed by fires. It deploys its spread out leaves at the end of the stems giving a very attractive aspect covering hills and mountains deprived of forest. Its leaves sticking harmoniously around its large stem offer the shape of a giant fan. The base of these leaves is a very genuine limpid water tank which can help you quench your thirst in the Malagasy forests where springs are lacking. It is because of the existence of this accumulation of water in its petiole that this tree was baptized “the traveler’s tree”. Because of its quality which has equal only its natural beauty, this tree offers to Malagasy gardens or parks a very appraisal decorative appearance which has become a target for gardeners from all four corners of the world. It is more abundant on the eastern side of the island.

Apart from the traveler’s tree, more than 120 palm trees of various forms, from the simplest to the most strange, remain in the Malagasy forests. A great majority of these palm trees do not exist anywhere elsewhere than in Madagascar. Among the species of existing palm tree in the large island, are Dypsis acuminum, Dypsis baronii, Dypsis occidentalis, Dypsis onilahensis, Dypsis lokohoensis, Dypsis perrieri, Dypsis decaryi, Chrysolidocarpus lutescens, Marojejya insignis, Dypsis bonsai and Dypsis pumila…
These species are widely distributed throughout Madagascar. Some of them are endemic for certain areas. The Malagasy palm trees, especially those regionally endemic, are currently represented in the protected areas.

The species Dypsis decaryi, also called “the three cornered palm” is very singular. The leaves of this species are drawn up on three opposed axes to give an equilateral triangle. This form is visible since the plants have a smaller size. This palm tree presents rather long and fine leaves with leaflets harmoniously distributed on a petiole. The list of the endemic plants which make the charm and the originality of Madagascar is unending.

One also notes a singular plant called Katrafay. This one is a plant of an average size (12 with 15m). It is spread especially in the thorny forests of the southern part of the island and in the dry forests of the Western Madagascan. It belongs to the family of Ptaeroxylaceas. The grayish and rough bark of katrafay is finely crossed by furrows and cracks. This plant has a very singular aroma and it is especially famous for its therapeutic virtue. It is traditionally used to cure many diseases or to alleviate the pains, especially in rural environment. Katrafay is considered to be stimulating and aphrodisiac.

Madagascar also presents many species of rosewood or Dalbergia species belonging to the Papilionacea and the Pterocarpus families. These species are the object of a current strict regulation in their safeguarding because of their rarity. They are extremely prohibited for export. These plants which produce a very high quality wood for furniture grow very slowly. Consequently, their regeneration can take several years following a clearing. At the present time, they are increasingly rare in the forests but they still remain quite visible in the parks of Madagascar.