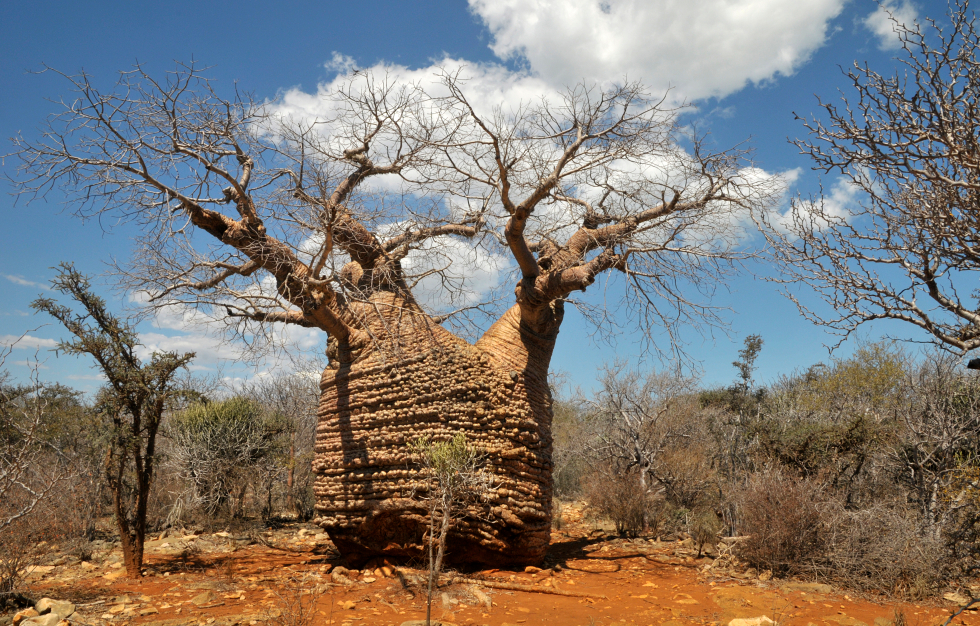 Filed RAMSAR site in 1998 by the size of its zone of humidity, the region where the park is located is also favorable for water birds habitat. So the main attraction of this park lies in the observation of endemic birds that are often found on the shore of the salt lake.

The Tsimanampetsotsa National Park is located 275 miles from Tulear by road and 2 hours by speedboat. Towards the Southwest coastal areal, it is located in a sub-arid region of Madagascar.

This protected area is composed of a coastal forest, a limestone plateau, with a sandy lake and several caves some of which are accessible. The park is located around the Tsimanampetsotsa salt lake, a body of whitish water that is 20km long and 3km wide and shallow (up to 2m). It is the only lake composed of lime sulphate in Madagascar, that is the reason why no fish lives there. The site is also surrounded by limestone cliffs sheltering caves with stalagmites and stalactites and underground river of fresh water. The total area is 43000ha. There are three types of landscapes that have produced three types of vegetation
› A limestone plateau with raw mineral soils
› A limestone plateau with red sands, ideal for growing
› A coastal plain of sand dune

The wind blows strongly in this region of the southern part of the island, sometimes it can reach 100km per hour. It hardly ever rains in the region of Tsimanampetsotsa, the rainfall ranges from 350 to 500mm per year.

Generally, the access to this protected area is restricted to accredited researchers but for the passionate amateur, an early request to ANGAP could also be done. The main attraction of this park lies in the observation of its endemic birds. This does not prevent you from walking around the reserve and discover its natural beauty as well as its natural riches, which the association that maintains protected areas converted into small circuits to visit.

The tours of the park are divided into four different circuits:

› The Tsiamaso Tour: It consists of the discovery of the caves that house blind fish or « Typhleotris Madagascariensis ». The interior parts of these caves are also adorned with stalactites and stalagmites and also contain a rather frightening legend of the tribe Antambahoaka.

› Emande Tour: Which means “irrigation”, in this case, it means a source which supplies the lake. Throughout this tour, we learn the history of its people through the discovery of the ancient tombs. Lemurs, water and land birds, reptiles will be our guests on this beautiful site where we can also admire an overview of the lake.

› The Andalamaike Tour: It is a special botanical tour, where we will see various forms ofadaptation of plants to drought. Turtles and land birds will be present if you are lucky, with the famous turtle radiata.

› The Andaka Tour: it is around the lake in its western part admiring the flaming trees and other water birds. For these tours, one must have good walking shoes because of the limestone soil.

We would like to repeat that the park is especially popular for its 72 species of endemic birds. We may not get to see all of them but with much luck and perseverance, we will get to meet some like the gray headed lovebirds, the crested coots with the scientific name « Fulica cristata ». Let us also quote the Madagascar Drongo, parrots, Newton hawks, Couas verreauxi or “couinae” the rarest plover or Madagascar « Charadrius thoracicus ». During the dry season, we can observe flaming trees « Phoenicopterus ruber » around the lake, the flaming trees and grebes as well as other water birds.

Lemurs are still represented in all of Madagascar, we have identified three species including the lemur catta.

Finally, a rare species that we have listed is the Galidictis grandidieri, a carnivorous species and mammal that can be searched during the night walks.

As for the park’s flora, vegetation adapts to this dry area but also to the limestone terrain, forming leafless or spiny vegetation typical to the South, with swollen trunk or with reduced leaves.

As we have said before, the three landscapes that constitute the park have also produced three distinct vegetations:
› The limestone plateau with raw mineral formed clumps of dense vegetation, some plants have short branches.
› The limestone plateau on red sand formed a dense dry forest emerging up to 12m high.
› The sand dune has formed 4m tall shrub with prickly species.

Finally, to get an idea of the landscape flora of the reserve, let us name some of the following species: Thicket at Alluiaudia montagnacii, adansonia fony, plangiantha euphorbia and acacia sp pachypodium lamerei, Didierea trollii, kalanchoe beharensis, Acanthaceae ….

The Tsimanampetsotsa region is inhabited by the Vezo and Tana tribes. They have their own customs, habits and traditions that we can discover through their various Funeral ceremonies such as during a major holiday, «the asa Lolo ».

As a conclusion, a lot of possibilities are offered for visitors to stay there. There is a hotel in Ambola, hotels in Beheloka, which is 30km away or camping is the easiest way.