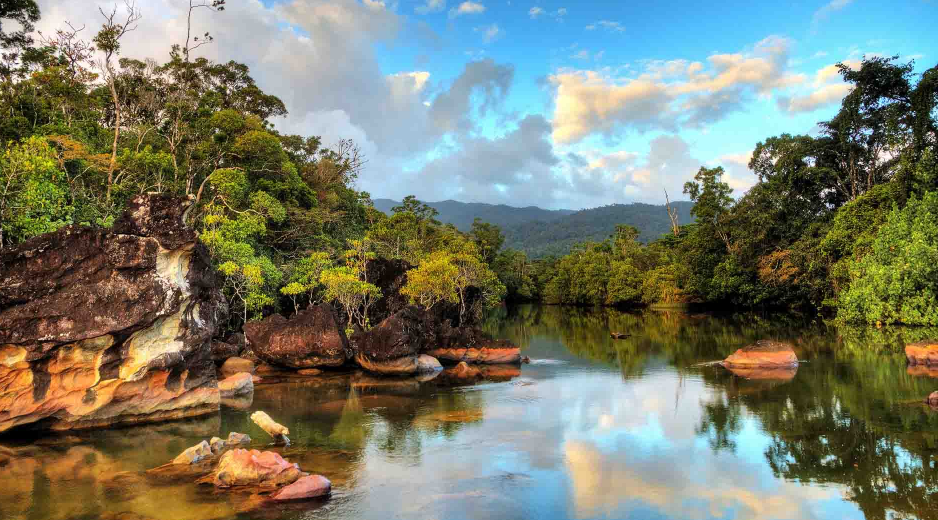 The Masoala National Park has a very eloquent name. This name consists of two Malagasy words: “maso” and “ala” they literally mean “eye” and “forest”, that is to say eye of the forest and they evoke the greatness and value of this forest.

The Masoala National Park on the peninsula of the same name is a complex of protected areas composed of park land, with 2300 sq km, and Marine Park, which covers 100 sq km. The park consists of seven units of protected area and it is even regarded as the greatest of the Big Island. It spreads over an area of almost 250 000 ha.

The Masoala National Park is located on the Bay of Antongil on the northeast coast of Madagascar. The area which extends the park is the watershed between northern Madagascar and the east. In other words, the National Park straddles between two regions of Madagascar, namely the SAVA and Analanjirofo.

Located in the east coast of Madagascar, Masoala National Park has a tropical climate with high humidity widespread in this part of the island. Constantly swept by trade winds with a very high percentage of humidity that is added to hot temperature (23.9 ° C annual average), the area records rainfall almost every day. It is even said this is the wettest area of Madagascar. In general, this area recorded a total annual rainfall rarely falls below 3000mm. This area is also known as a privileged way of cyclones that takes lives in the Indian Ocean between December and April.

The Masoala National Park is spread over a terrain with varieties of altitude going from sea level up to 1311m high. The specific rock found in the park area is the granite.

The Masoala National Park presents a very big tourist interests with great importance from historical view to an exceptional biodiversity of fauna formed with a high rate of endemic species which represent the Malagasy fauna and flora diversity. In addition to the terrestrial environment, the Masoala marine ecosystems is also very fascinating, it has reached the rank of the most important marine environments that exist in the eastern part of Madagascar.

In terms of flora, forest types ranging from primary forest to lush evergreen forests on marshy bottom through the mangrove forests show high diversity and abundance of species. These various vegetation formations are formed by very varied vegetation species . A large majority of plant species existing in the Big Island is seen in this region of the island. In the relatively pristine forests, the most remarkable species are formed by precious essences such as ebony and few rosewood families and palissander….
Just like the richness of Madagascar in the palm species, the extensive forest of Masoala Park is not behind. It also contains about fifty species of rare palms, some of which are endemic such as staggering Tiedra palm. The trunks of palm trees are adorned with different species of orchids of singular beauty.

In the suburbs of primary forests, more open formations are dominated by the traveler’s tree or “ravinala” which is itself the Island National tree. At the feet of ravinala trees, from place to place the presence of Nepenthes, the only carnivorous plant of Madagascar is noted. Identical to terrestrial, marine plant species that make up the three marine parks are also very rich. In trying to dive in these marine parks, meeting with an impressive array of marine species forming coral reefs will surely amaze you.

These different plant formations covering the Masoala Park is a perfect shelter for many species of animals living in the peninsula. Among the most notable of the park, there are the lemurs composed of ten species, birds, reptiles, … In Masoala, you can primarily at night, contemplate the amazing aye-aye. This endangered species is currently very limited in number. This park is home to species of lemur that exist only within it namely the Red ruffed lemur, recognizable by its shiny reddish fur. This specie like the aye-aye and two other species are classified as highly endangered by international conservation. To complete the number of species of lemurs, it also notes the existence of the smallest primate in the world to know the red mouse lemurs.

In terms of reptiles, Masoala displays a significant endemic variety. Among the endemic species found in this park include the Uroplatus, commonly called leaf tailed gecko. Chameleons very representative of Madagascar are also well represented with different species such as Brookezia and Furcifer. These species are varying in size ranging from the smallest to the largest. These species moving nonchalantly are easily approachable as some of them are very colorful and others can be seen right in the middle of the trail while crossing. Beside chameleons, other species which can come with bright colors are the Phelsuma geckos also visible in the Masoala.

Birds of Masoala National Park are as attracting as the other animal groups. They are equally spectacular. The most important bird species are the vanga, owls including the red one, bats and the serpent eagle. This latter is a species of the rarest bird and there is currently only a few couples.

In addition to these groups of animals such as amphibians and insects also occupy an important place in the Masoala ecosystem. The tomato frog is the most typical of amphibians while Urania ripheus is more representative of the butterfly within the park.

To observe both plant and animal species, some sites like Nosy Mangabe , Tampolo, Ambodiforaha and Ambatoledama … can be arranged within the park. Trails are available in these sites from day hike to several days. For those who love the ocean more than the forest diving sots are also available within the marine reserve.

In order to visit a unique nature park as the Masoala, you will also encounter the very welcoming Betsimisaraka (inseparable) tribe. Bordering the park is a tribe known more precisely in the name of Antemaroa which constitutes the majority of the population. These people from the coast of spices are living from agriculture, especially crops for export.

Camping areas are promptly put in place to allow tourists to install their tents. But in some places as Tampolo, enough small rustic hotels offer their hospitality