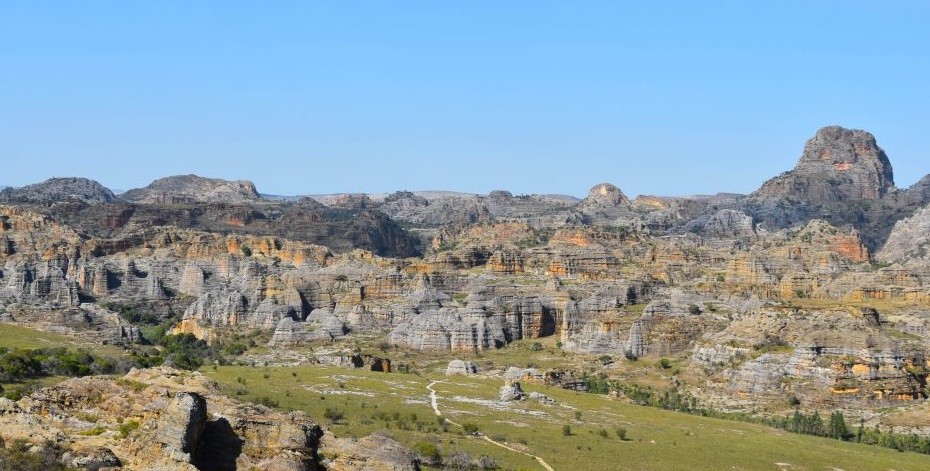 Erosion has carved a ruiniform landscape ranging from 820 to 1240m above sea level with spectacular deep canyons having fascinating names: Canyons of monkeys and Canyons of rats around which many perennial rivers run; rivers infested with crocodiles, fish and giant eels; and oases making the landscape less forbidding.

THE MASSIF OF ISALO

The site of the Isalo Massif is located on the National road 7 going towards the South West, in the town of Ranohira, 683 km from Antananarivo and 243 km from Tulear. The park encompasses the northern part of the Massif, which extends over 100km from north to south.

This huge eroded massif stretches over a vast bed of grass, strewn with “tapia” forest (broadleaf forest providing food for sericulture). The park is nearly 81,540 ha.

The climate is tropical dry, the monthly temperature ranges from 17-25 ° C. In any season, it is advisable to bring warm clothing for the night. Rain is rare and it almost does not rain from June to August. Bring much mineral water, a hat, and lotion to protect against sunburn.

Isalo is fantastic: it is not just about the colors and shapes of the land damaged by the erosion, but also the great scenery and the general silence that surrounds everything. It is also a set that all “Bara” people consider as sacred.

Walking tour, car tour: You can visit the wonder of this national park on foot or by car (4x4) with a guide and a carrier depending on the number of people: You can, then, see the following sites:

› The natural swimming pool: 15 minutes by car (4x4) or 40 minutes on foot + 1 to 2 hours of walking. On the track, we admire the varied landscape with different spectacular forms of sandstones. The rock formations received typical names from the guides: We notice the “Turtle”, the “African woman”, the “skull” or the “crocodile”. The trail is dotted with the famous plant called “Pachypodium”, dwarf baobabs, and we can sometimes come across lemurs, birds and chameleons. After an hour’s walk with short climbs, we suddenly find ourselves over a valley that resembles the famous Death Valley or some valleys that look like the valleys of Colorado. We suddenly overlook a rocky and desert valley, with the exception of greenery winding in the middle. The short hike is worth a good relaxation in the natural pool with all the greenery that surrounds it; perfect from every perspective for a pure relaxation.

› The Canyons of rats and canyons of the Apes: They include granite rocks, requiring a sportier tour, with a short hike on marked trails, along a waterfall of turquoise water, with a distance of 40 minutes by 4x4 car + 2 - 4 hours walk. The walk, however, allows us to have an impressive view of the cliffs, forests and rice fields; with a turn on a savanna, a rainforest and an ancient royal village. The canyon of monkeys, a tour oriented to the observation of the “Sifaka”, the ring-tailed lemurs. The canyon of rats, includes a waterfall and another natural pool for a shower, and a visit to the Bara graves. When we enter the canyon, we can see Bara tombs dug in the rocks. Every time we bury a corpse, after the traditional washing of the bones, the dead is buried a little higher inside the wall of the tomb.

› Portuguese Cave (cave built by shipwrecked Portuguese sailors in the sixteenth century, natural refuge before arriving near Fort Dauphin) and forest Sahanafa: The tour is still very sporty because of slopes, dangerous paths, its rivers crossing, the length of the distance between sites. For 4-7 days of walk, we can enjoy diverse landscapes, archaeological sites, dry and wet forests with rare species, all sorts of plants, birds and lemurs.

› NAMAZA Canyon: It’s a track that goes up to various kinds of rivers. 20mn by car or 1h on foot + 1 to 2 hours of walk. After a course of difficult paths, we discover a panoramic view of the forest, the waterfall, the blue and black swimming pool with possibility of swimming in them. The valley is rich in flora and fauna endemic to the South East. Green Forest, river, waterfall of the nymphs, birds, butterflies, lizards and rare lemurs. The black pool: it is actually an area where water flows from a higher source, providing a great relief from the scorching sun.

› The window of Isalo: a mass of naturally carved rock shaped into a window opening onto the vast desert valley, one needs pay attention not to miss the sunset.

There are 77 species of birds, of which 70% are endemic. Among them, the Pseud cossyphus benson named Blackbird of Benson rock, a species endemic to Madagascar, which is only found in Isalo. We can see lemurs such as the Propithecus verreauxii, the ring-tailed lemur, the Microcebus murinus, the mirza coquereli, the ruficaudatus sportive lemur, Eulemur fulvus rufus’s, etc.., And 33 species of reptiles, 15 species of amphibians and small mammals. The flora is dominated by the “tapia” of the Euphorbiaceae family (Uapaca Boger kind) food of the landibe, a silkworm that produces natural Malagasy silk. 116 medicinal species, species of wood for construction, timber for furniture and craft work. For botanists, the types of rosulatum pachypodiums also called elephant feet, a bulbous plant clinging to the rocks, as well as aloe isaloensis and a species of aloe specifically indigenous.

The major ethnic group is the Bara. At Isalo, you can visit the Interpretation Center: This center is worth visiting to learn more about the people who live around the park and the wildlife that inhabits the center itself. Apparently, to reach adulthood, not only does the Bara have to steal animals, but he also has to be tested on epizootic disease, the study of parasites and diseases affecting the zebu.

There are two choices: either by camping inside the park near the natural pool, near the Namaza river, near the canyons and in a secure site along the national road, or “the oasis “, a cave fringed with palms, which only store a small amount of water during the dry season and which causes a disappointment. There are also different categories of hotels.

The site of the Isalo Massif is located on the National road 7 going towards the South West, in the town of Ranohira, 683 km from Antananarivo and 243 km from Tulear.