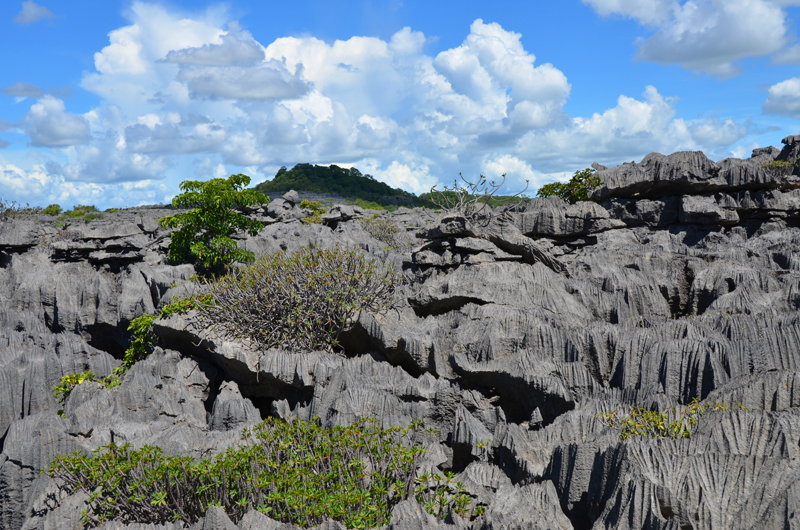 The Ankarana National Park is an extraordinary world we cannot find anywhere else. This park combines the wealth of a mineral limestone world to the variety of its ecosystems while playing a cultural forefront.

The Ankarana National Park is located 100 km south of Antsiranana (Diego Suarez) by the national road 6; a journey taking nearly two hours. It is spread over an area of 18,220 ha. Due to the characteristics of its topography, its flora and fauna, it is one of Madagascar’s protected areas.

The landscape of Ankarana is very rugged, based on a basaltic soil with lime deposits in some places, under a seasonal dry forest cover. The main feature of the reserve is represented by remnants of the eroding Tsingy limestone, having sharp shapes and forming in worn places very narrow corridors creating labyrinths extremely difficult to navigate without a guide. Other morphological characteristics, however, are very important because they constitute and maintain an exceptional variety of ecosystems, habitats and species. Born under the sea millions of years ago, limestone abounds and gives rise to caves, underground rivers and canyons that stretch in the middle of a forest, which is sometimes dry and sometimes very green. On the surface, erosion has carved the Tsingy limestone to sharp ridges; and deeper, she formed the longest network of underground water in Africa spanning 110 km, often involving unusual or even unique wildlife.

The climate is tropical dry, with temperatures ranging from 24-28 ° C. It only rains 90 days during the year whereas the mountain is the contact zone of the Indian Ocean monsoon and trade winds in the Mozambique Channel. We experience a dry season from the month of May to December and a wet season in January and February. It is especially hot in March with temperatures reaching 36 degrees and cool in June with 13 ° C.

After Bemaraha reserve, this place comes second to admire the Tsingy. It requires a good physical condition not only to explore its lowest parts, but also to like the dizzying emptiness. Some hiking tours include a physical exertion from climbing huge boulders, the passage through narrow crevices and lead to the summit of rocks carved by erosion extending faraway.

The reserve mainly consists of many Tsingy or sharp limestone rocky peaks drawn up towards the sky, shaped and sculpted by wind and rain erosion. When you stay at camp Anilotra, the best Tsingy location is at about two hours walking distance on a very difficult terrain, passing close to the beautiful crater lake called Green Lake. This is an absolutely wonderful trip that takes a full day in hot weather. We recommend an early morning departure, when it is still cool, carrying a packed lunch and plenty of water. Wooden bridges overlooking the field of the tsingy enable people to admire them safely while protecting the weak rock. Notice the strange succulents such as pachypodiums that seem to grow in the limestone itself. The fascinating tour of caves carved by underground rivers enable us to see eleven caves listed, some of which contain royal tombs and reveal the sanctity of places of worship, especially because of the treasures hidden there.

Centuries ago, during a great battle between kingdoms (an ethnic war), the Antakarana tribe fled to the field of the Tsingy and perished there. Since that time, the place has become sacred, offerings are made and ancestor worship is practiced in these caves.

Coral caves and other draperies of calcite whose folds fall like those of a fabric developed in the galleries of stalactites, stalagmites, héléctites, héligmites, giving rise to columns. In contrast with the heat outside, the caves are havens of calm and freshness.

At the beginning of the visit of camp Andrafiabe, it is possible to explore the immense maze of corridors caverns of Andrafiabe. We believe that even a person with severe claustrophobia cannot feel uncomfortable here. These caves are well worth the visit and in the middle of the route, it can lead to a spectacular canyon with the possibility of returning to the air. At the southern end of the reserve, you will find the caves of crocodiles, less visited but worthy of the trouble we have taken to get there. The site is spectacular and the hallways are enormous. Please have a headlamp or a flashlight when entering the caves for on this delicate ground, walking can be difficult, if not dangerous. In the cave of bats, you feel as small as a mouse, because of its steep walls spotted with bats and swallows nests. The ground, covered with crawling cockroaches, is also littered with dead bats.

The canyons and sinkholes are from tectonic movements and also the collapse of tunnels. The longest measures 8 km and crosses the mountains from one end to another.

The northern edge of the reserve has a volcanic landscape, partially originating from a volcanic soil, dotted with numerous Strombolian cones. However, this landscape is less roughly arranged as opposed to limestone formations typical of other parts of the reserve. One needs to visit the panorama of Ambohimalaza.

The crater lake called Green Lake: It deserves its name, you can descend a steep and slippery slope to reach the waterfront. Another phenomenon can also be examined: the loss of rivers (river submerged in a sink during the rainy season)

The admiration of landscape changes should not overshadow the human element, in particular the encounter with the Antakarana tribe, the knowledge of its cultural value and the history of its kingdom.

Sinkholes often inaccessible facilitated the autarkic development of the fauna and flora. Vegetation typical of karst plateaus, meadows and invasive plants, dry forest. Botanical path lined with tall trees, Canarium in Madagascar, pachypodiums baroni and hildegardia, euphorbia, pandanus, the accessible lianas, air orchids, baobab (family of the Adansonia). Wildlife is a little richer if we quote the 10 species of lemurs who live there (Eulemur fulvus sanfordi, northern Lepilemur, Hapalemur griseus …), 92 species of birds including the " varied Weevil”, the rarest in the world which only exists in this reserve of Madagascar, chameleons, Fossa. Rivers gave a troglodyte wildlife including species devoid of pigment or blind. The caves are home to over half of the bats of the island, 13 species and other animals in the dark world. Some rivers are home to 6m long crocodiles.

Several campsites are available in the reserve. But it is also possible for a day trip, depending on the availability, return to Diego to spend the night or closer to Joffre city. It is recommended that you purchase a visit ticket from Antananarivo or Diego Suarez. The easiest way to visit Ankarana is through a tour operator.

The other tree species which make the happiness of the visitors who arrive in Madagascar is the Ravinala, or “the traveler’s tree”.