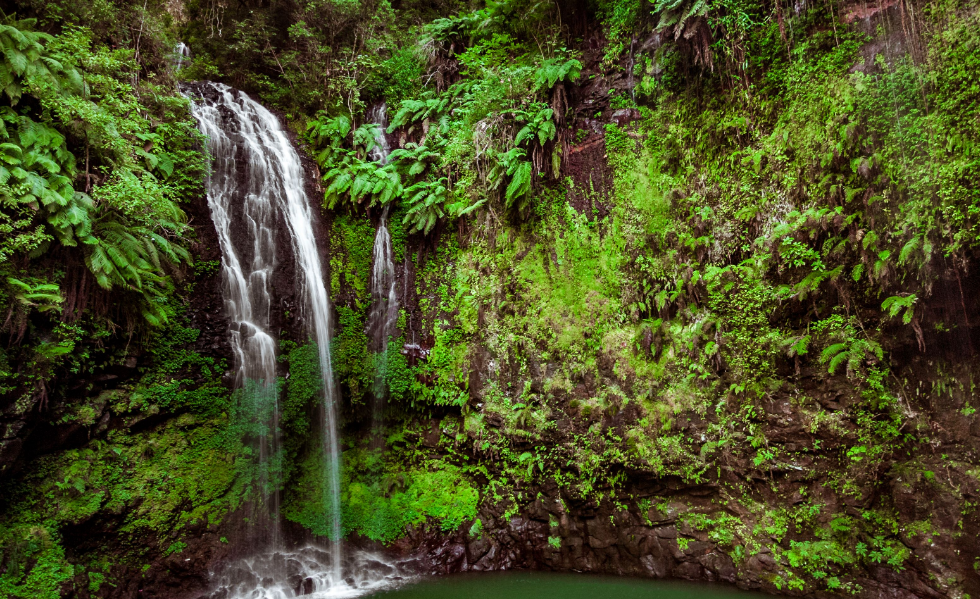 The national park of the Amber Mountain was created in 1958, when the French colonial government recognized the unique nature of this volcanic massif and its forest. The name Amber Mountain does not come from deposits of precious amber, but the amber resin flowing from some of its trees and used by some people for medicinal purposes.

The park is located 35 km South-West (45 minutes by car) of Antsiranana (Diego Suarez).

The Amber Mountain is based entirely on a substrate of volcanic origin dating back to the Quaternary age. There are two forms of landscape: uneven in the West but less hilly in the East.

It consists of a magnificent specimen of highland rainforest or mountain forest. It enjoys its own microclimate, with rainfall equal to that of the Eastern Region. It is the first national park established in Madagascar covering an area of 18,200 hectares, spread over a volcanic massif, at an altitude varying from 850 to 1475 m.

The climate of the Amber Mountain is tropical humid with rainfall reaching 3585 mm per year, making this portion the wettest area of the island. The mountain is then a real water tower for most part of the region. The rain and cyclone seasons last from December to April while the dry season lasts from May to August; but a strong wind called “Varatraza” blows almost every day, and it can get very cold.

In the park, the temperature may drop below 10 degrees F to that of Antsiranana, and it often gets wet and muddy, a situation exacerbated by the presence of leeches. Therefore, avoid wearing shorts and sandals, even if you feel warm and dry at sea. Bring rain gears, insect repellents, or even a lightweight knit for mid-Season. The most satisfying visits are during the warm season (September to November). You will then have a little rain, but most animals will be active and visible, while the lemurs will have their babies.

The flora mainly consists of :
› A mountain rainforest at the summit;
› A dense humid forest in the west;
› A forest that is half humid and half dry at the center and dry deciduous dense forest in the east.

The fauna is characteristic of the population typical to the rainforests of Madagascar and species restricted to the north. Botanical paradise, the luxuriant vegetation consists of herbs, giants trees such as the “ramy or canarium madagascariensis”, the traveler’s tree, the rotra whose fruits are eaten by lemurs, the orchids, the strangler lianas, the palms and the pandanus.

The Parc of the Amber mountain is very interesting, both because of its plants as its animals. All visitors are impressed by the tree ferns and epiphytic ferns growing on trees in bird nests. The pandanus are also common, and we can also find the cicada endemic to Madagascar. In addition to the show there are enormous banyan fig trees.

Most of the visitors want to see lemurs and since the two diurnal species become more familiar, the observation is facilitated. We can, especially, find the smallest lemur in the world, the red Microcebus that weighs only 50 grams. We will see more lemurs like the crowned lemur and Sanfor lemur. From time to time, we can see other mammals such as the Ring-tailed mongoose, and with great luck, the Fossa.

Let us mention another carnivorous mammal: the Galida Elegante endemic to Madagascar which is at the heart of the Amber Mountain, a small carnivorous animal of the Viverridae family, which sidles through the grass with extraordinary speed.

Take time to carefully observe the forest ground because that is where one can see the Brookesia chameleon camouflaged in leaves, barely two inches long, centipedes rolled into a perfect ball, frogs, butterflies and a whole army of other living things. At eye level, it is possible to see chameleons, but the way to Diego is a hunting area more conducive to see these reptiles.

Even people who are not passionate for ornithology will be fascinated by the countless species that may be encountered in these places: the Madagascar Crested Ibis is quite impressive to be noticed by everyone, just like the paradise flycatchers with the long feathers of its tail. The forest thrush of the rocks is less wild, and can be found everywhere, while the black and white magpie robin is everywhere. Luck, however, comes with the most beautiful birds of Madagascar, the burrowing similar to pitta. The 75 species of birds recorded in the park include the little crested kingfisher, the Pycargue which is the largest raptor of the island, heron, hawks, parrots, owls, wild pigeon, sparrow, and 36 species of butterflies, 34 species of amphibians, three species of bats including the fruit bat from which the name “station of the fruit bats” comes.

This park offers various attractions ranging from the visits of its various places of interest to the most demanding hiking. You can admire a beautiful tropical forest, rainforest like, waterfalls, one of which falls from a height of 80 m, numerous crater lakes, including Lake Mahasarika, the source that supplies water to the city of Antsiranana. It is necessary to reach the summit which offers a magnificent view of the northern tip of the island between the Mozambique Channel to the left and the Indian Ocean to the right.

The visit of the park can be done in two or more days while staying in a shelter or camping out, allowing an nocturnal visit of the park. The nearest town, Joffreville, lies at a distance of 7 km and offers three hotels. Coming here, you must always bring warm clothes because the weather can be hot and dry in Diego but cool and wet on the Amber mountain.

During the dry season, it is possible to go by car to the main picnic area, which is a unique opportunity, for elderly visitors or those with physical disabilities, to see the forest and its inhabitants.

In theory, the park has 30 km of tracks, but many of them are covered with vegetation, even if we clear them and rename them gradually. The best tracks, which are also frequently used lead to the small lake, the botanical garden and two waterfalls, the big Antomboka waterfall and the small sacred waterfall. There is also a tourist trail leading to another admirable waterfall.

Those three waterfalls are the focal point for one day visitors. If you only have a limited amount of time and if you want to watch wildlife rather than have a long walk, you can go to the sacred waterfall. It lies about 100 m on the track past the picnic area (fruit bats station), and as you go there, you should see a lot of lemurs, orchids and birds including the White-throated rattle and the kingfisher with a malachite color. The sacred waterfall is an idyllic cave surrounded by ferns, with waterfalls flowing into a fountain. During the warm weather, a small colony of bats twitter in the overhang to the right of the fountain. The Antakarana waterfall is extremely photogenic and allows a view of the thrush forest of the rocks and many other birds. The Antomboka waterfall is connected to a path having parts with ups and downs, with a steep descent to the waterfall. We find good opportunities to observe birds, to see beautiful tree ferns and opportunities to see lemurs, especially if we took care to bring bananas in our picnic basket.

Walking for a day after the station of fruit bats, we reach a crater lake called " cursed Lake” and an hour later the Grand Lake. Beyond this point, you reach the top of the park, the Amber Mountain itself at 1475m high. Except for people in good shape and great fast walkers, it is better to set up a camp at great Lake and make the journey in two days. This will allow you to wait until the weather conditions are favorable and to have a spectacular view.

The ethnic groups in the region are the Antakarana and the Sakalava.

The accommodation will be in hotels in Joffreville and Diego. There is a campground and a lodge at the resort of the fruit bats.

The humpback whales have as scientific name the Megaptera novaeangliae.