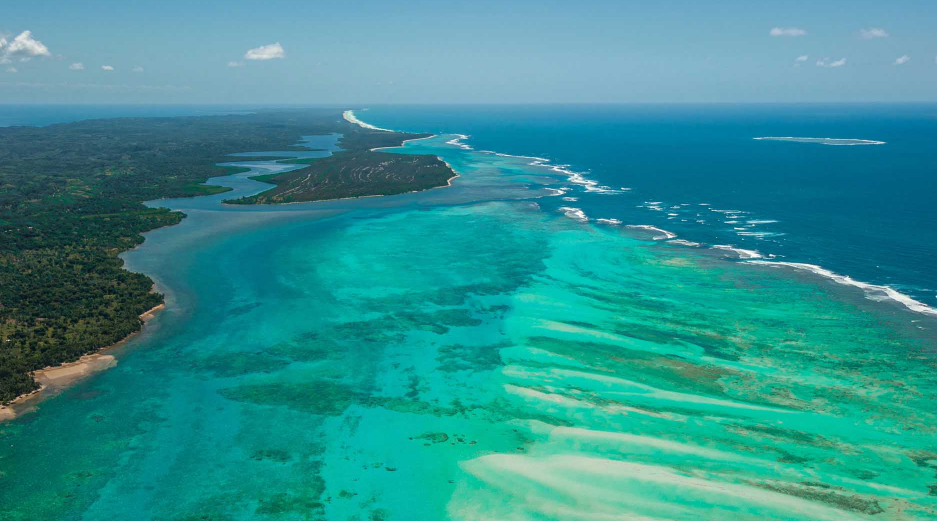 For a stay in Madagascar, Sainte Marie is definitely one of the places not to be missed. This island off the Eastern coast of the “Great Island” is known also under the Malagasy name of “Nosy Boraha”.

It is peaceful and well established on the Indian Ocean coast of Madagascar in a corner of lagoon where whole quietude reign. On this beautiful island, the Saint Marians, like the Malagasy, who are so used to warmly welcome people, are ready to receive you in a corner where the life goes on smoothly.

Constituted of string of islands, Sainte Marie is surrounded by other islands more or less important with very allusive names such as “Ile aux nattes”, (the island with the plaits), the “Ile au Madame” (small island Madam) and “Ile aux Forbans” (the islands with the Pirates). The island profiting from a rather well sprinkled climate is baptized as a tropical garden because of the presence of rainforests which cover it. In other words, it is covered with green vegetation all the year.
These luxuriant forests are a perfect and ideal shelter for various species which are also encountered on the Great Island such as the orchids.

A past linked with the pirate : Sainte Marie is an island full with history and legend. The past of this island is enriched of more than one century of history closely related to mythical figures of pirates of the 17th and 18th century. Because of its situation and the favorable conditions of damping (bays and circuses safe from storm) which it offers, it had become a privileged place of retreat for Pirates like John Avery, Christophe Condent, Thomas Tew, William Kidd, and Olivier Vasseur… In the past, some of these pirates left descendants on this island which constituted their home port and their permanent residence at the 18th century. At the present time, it is still possible to discover the prints which testify the old presence of these thousands of pirates.
While going to “Ile aux Forbans”, one can still see several tens of these pirates vessels. These authentic vessels are currently engulfed at just a few meters on the Indian Ocean.

The most outstanding relics left by the passage of these pirates are their cemetery being on the high course of the “Ile au Madame”. This cemetery is across “Ile aux Forbans” and is reachable at low tide. This place of eternal peace for the pirates of the Southern Seas is covered of a green grass spotted with brownish marks of tomb stones. To testify the of this cemetery, you can see, just by the entrance, on one of the tomb stones a very famous emblem composed of two crossed tibiae bones surmounted of a skull. In addition to the pirates, the cemetery also shelters tombs to many other “persona non grata” ones in their respective country. Certain numbers of sailors and dealers of the 18th century are also buried there.

The other attraction of the island Sainte Marie is the meeting with the humpback whales during the mating season, from July to September. During this season, the sea of this part of Madagascar becomes the sanctuary and the place of predilection of these whales “Megaptera novaeangliae”. In other words, the sea around Sainte Marie constitutes a habitat of these whales in the search of warm sea to give birth to their offspring and to initiate them with life. Before giving birth to their young ones, these whales court themselves initially before mating from which the males raise spectacular gestures. The characteristics of these whales are that they are supplying in the icy seas of the Antarctic; and on the other hand they are procreating in tropical warm water like the channel of Sainte Marie. These humpback whales are provided with very long pectoral fins.

The arrival of these species, also called trozona in Malagasy, in the sea of Sainte Marie each year is the object of an enormous festivity which awaits only your visit. The festival “Zañaharibe” is a great event on the island Sainte Marie and it attracts an important crowd coming from four corners of the Great Island and all the countries.

While they make their spectacle with broad sea, one can easily approach them while taking part in safaris organized by tour operators. They are easily located with the large breathing which they spout out and which announces their presence. While heading towards these enormous animals of ten ton, one will be able to admire the parade of spectacular jumps, the striking of the fins (pectoral or caudal) on the water of the males and the gestures of tenderness shown by the mothers towards their baby whale. These behaviors generating some unbelievable spectacles mean something very significant for the whales.
Thus these gestures are useful to communicate, to court or to mark their zone, etc…

All these gestures occur on the surface from the sea but the sea-bed still reserves much more surprising spectacle from diving under water. The lagoon of this island is composed of a splendid coral frame. The several diving sites it offers are among the first orders in Madagascar. From just a few meter of the surface with a tuba, you have the occasion to appreciate the ballet of multicolored thousands of various tropical fish species; larger (dolphins, dugongs,…) with smallest while passing by groupers, eagles of sea, rays, black points, barracudas, napoleon, sea turtle, parrots fish, red snappers, fusiliers, lobsters, corals slackness, large groupers, lion fish, crocodile fish, shells, vases of sponges… In opposite to Nosy Be, the Sainte Marie Island knew how to preserve her authenticity and its naturalness in spite of the tourist rush.

This small island is accessible by sea and by air. The planes start from Tananarive and land there after 1h flight or from Toamasina with just 15mn from take-off. By the sea, one can start from Toamasina driving the road towards Soanierana Ivongo then renting a boat from there, where local or fast patrol boat make the shuttle, but this is a long and tiring voyage.