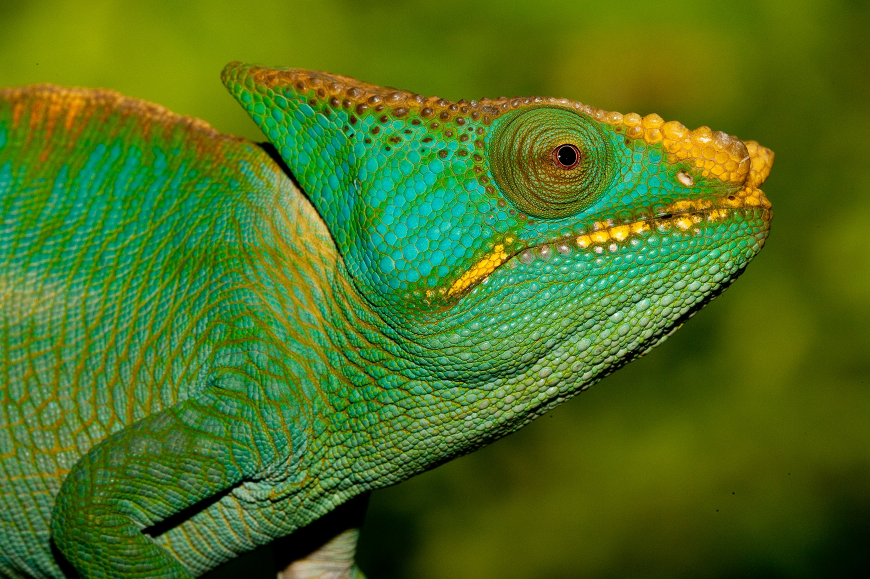 Chameleons are varied and innumerable; there are about 346 listed species. Thus, they become the second symbol of Madagascar after lemurs.

Chameleons are in the same family as the lizards, the geckos and the iguanas. They are different in size starting from 2cm (Brookesia minima as its name indicates, it a small chameleon, then comes the Brookesia tieli which is a dwarf chameleon of 6.5cm those species are found in the rainforests) to the biggest size being able to reach 65cm (Calumma Parsonili, commonly called Parson’s chameleon one of largest). They exist almost everywhere in the island: in forests like in private gardens.

Lizards crawl especially in houses and bungalows where they drive mosquitoes out. In the forests, chameleons and geckos remain an enthralling attraction. In the protected areas and in some private reserves, you can handle and pet them without any danger; it is an interesting unique experience! Chameleons change colors according to their moods and their environments. It was thought that they are camouflaged by adopting the color of their environment whereas that happens rather according to the temperature, according to their emotions; their fear or health. It is also a kind of communication between themselves. For instance, the female will have its bright color to let the male which it is ready for a coupling know that she is ready for breeding.

Behind their large strange eyes which move independently, and with their soft and discrete steps, they catch insects with a speed contrasting their slowness. The 131 species indexed originate from Madagascar; most of them are among Furcifer and Calumma species, they are tree dwellers, large and colorful besides the Brookesia species which are small and terrestrial. The list is long but we will mention those which are famous and impressive.

Brookesia: one of the chameleons genus among which are the brookesia vadoni, and the superciliaris species. Their size varies from 3 with 9cm and most of this genus lives in eastern rainforest such as the Masoala peninsula. The brookesia Perarmata looks like a miniature dinosaur on its 11cm length, one can find it in the western center of the island, in the Solid mass of Kelifely in a wet and shaded place. Only the brookesia genus counts about 22 endemic species in Madagascar in the eastern primary forest. Very slow, they move little and live under dead leaves, playing dead which makes them invisible.

Furcifer: The first genera is the Furcifer among which furcifer pardalis or the panther chameleon which measures about 55 cm and seems nervous and aggressive. It likes to be exposed to the sun and exists in North East of the island. The furcifer verrucosus, a Malagasy species such as the chamaleo dilepis is recognized by its clear line on the sides. It is found in the arid Southern biotopes beside the sea. It enjoys the sun but hides in the trees and the bushes. The furcifer lateralis with its 25cm size is recognized by its white band in the middle of the dark belly and three circles on the sides. The furcifer balteatus and labordi are in the East and South East part of the island.

Calumma: The second genera Calumma among which the Calumma Parsoni, one of the largest chameleons of the world. The size of the male can reach 70cm and can be seen in the dense forest of the east of Madagascar. Nomad, hiding in the vegetation, it opens out in wet places at moderate temperatures. Calumma gastrotaenia is found in the solid mass of Andringitra, the Marojejey Mount and in the Mandrivala forest. Calumma nasuta is located all over the island.

Lastly, let us finish with the geckos. In this category we can find The genus Uroplatus among which is the Uroplatus fimbriatus, commonly called leaf-tailed gecko because of its leaf looking tail. It is a nocturnal species. The genus Phelsuma among which is the Phelsuma lineata lineata, bright green day gecko; widespread on banana tree plants and quite common all over the island. 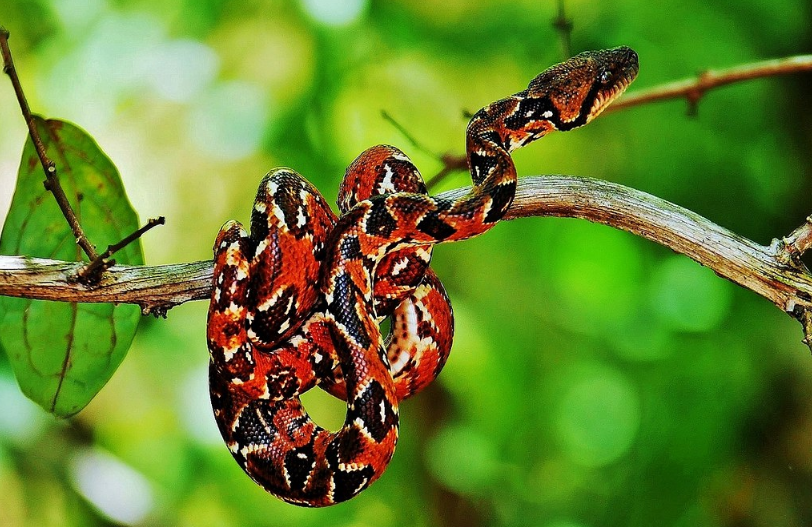 There are 80 species of snakes in Madagascar but none of them is poisonous. The most famous is the tree Madagascar boa or Sanzinia Madagascariensis. As it crawls slowly, it is easy to find. This snake however lives on the ground and feeds on birds and small mammals. The boa is active during the rainy season and is found at Ranomafana National Park, at the Lokobe reserve in Nosy Be, in the reserve of Ankarana and Amber Mountain Park in Diego.

In the West, one has more chance to meet the land boa Acrantophis. It is inoffensive under its brown color with black rhombuses. It measures about 1m 50 and does not lay eggs but give birth to babies snakes. It can be well observed on cleared fields, ditches, from time to time by the side of the road you cross. After the boa, come the leioheterodon species, yellow-stripped black snake which nourishes itself of frog, lizards and smaller snakes. Quite aggressive, its bite can be painful but not mortal. One can find it in the North, in the Amber Mountain, the reserve of Ankarana and the reserve of Ampijoroa. One distinguishes from other species of snakes in the island the water snakes which can be seen in rice fields and marshes and the sea-snakes that can be located in the coral reef around Ifaty. 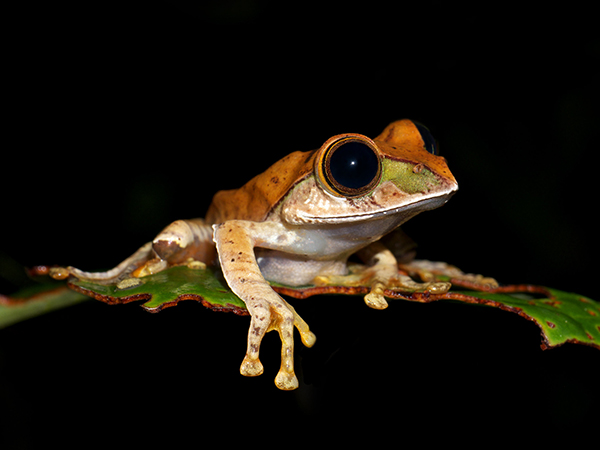 Frogs are also endemic in Madagascar. One counts 146 species here out of 11 species in Europe. Thus, Madagascar can be the paradise of herpetologists and amphibian lovers. Either they are nocturnal or diurnal the frogs are also impressive for their behavior, their size and their color. It is true that they are less colorful than the Central American species but one can find very beautiful species like Mantella, such as the Mantella Aurentiaca. Tree dweller, it measures approximately 2-3 cm. Endemic, it lives in the rain forest. Even if its songs resound extremely in the forest, its orange color is sharp and bright, it remains very discrete and very difficult to find. Viviparous, the female lays up to 30 eggs. The mantella laevigata is on Nosy Mangabe, this species can be poisonous.

Other frog species: discophus antongil commonly called tomato frog is endemic in the bay of Antongil. Rather “large”, round and broad but pretty, it secrets a sticky substance which is used as defense against the snakes. This substance can cause an allergy reaction for humans. The discophus guineti is also called tomato frog, gray yellow color which can suddenly turn into red orange which shows that its skin contains a toxic substance. It is between 8 and 12cm and can change form while inflating; for example, in the event of irritation. Tomato frogs are primarily nocturnal and evolve at low altitude; they live near ponds which are populated insects.