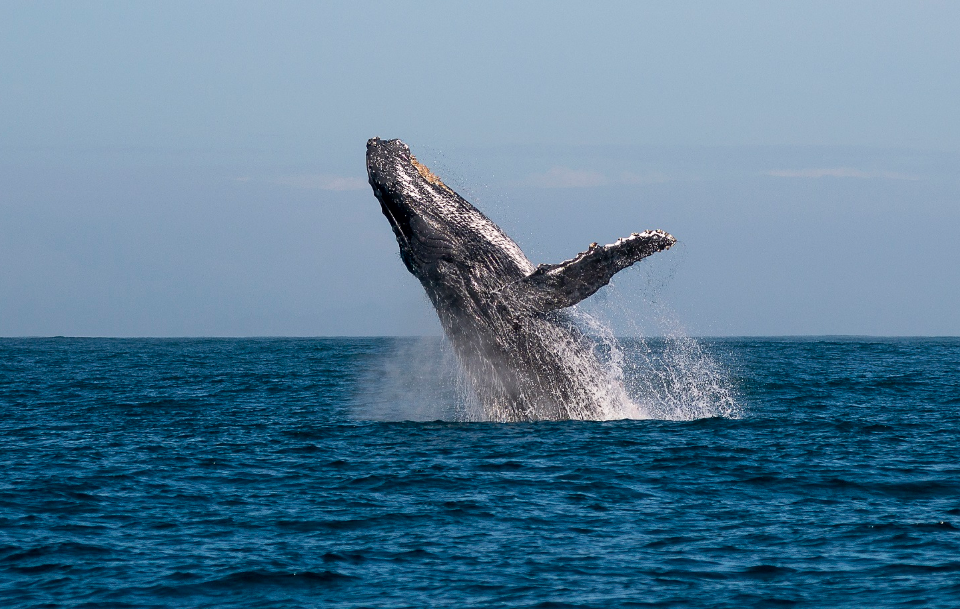 The humpback whales have as scientific name the Megaptera novaeangliae. They belong to the Cetacean family and whales with pennons. Those are classified among the big size Cetacean with length which varies from 12 to 16 meters and of almost 40 tons of mass. However, compared to the blue whales (the biggest species of whale and the largest living animal, which weigh 150 tons), the humpback whales are quite medium sized.

The humpback whales have very long pectoral fins. Many criteria make it possible to easily recognize the humpback whales like their massive body, an entirely black upper part and a rather whitish lower part … At the time when they get ready for a dive; they show their large black and white color caudal fin. This fin presents an undulation on its posterior edge. The humpback whales are present in many oceans. They are migrating species. From one season to another, they spend time from the high latitudes cool water to the tropical or subtropical warm water. In Madagascar, their place of predilection is the sea of Sainte Marie.

During the summer, they do nothing but storing reserves of greases which will be useful during the winter by hunting krill fish and the fish banks such as herrings and others. To capture their prey, they strike water with their fin and they can also attack directly. During the winter, these whales court, mate, reproduce and initiate their babies, the whale-calves, with the life. Each year, from July to September, the arrival of these whales in the sea of Sainte Marie causes a great festivity named “Zañaharibe” which pays homage to this very respected animal considered as God, by the population of Sainte Marie; from where the name “Zañaharibe” which means Grand God is from.

The observation of these humpback whales off the island from the beach or on board of chartered boats or while taking part in a safari is a spectacle which you are not ready to forget. The lifting behavior and the melodious songs, very elaborate and unique in its kind are what will attract you, which surely will amaze and which you will not easily be able to leave behind. These humpback whales regular jumps out of the water are spectacular and make their popularity. They express themselves through these imposing gestures such as the striking of the fins pectoral or caudal on the sea.
These jumps and these behaviors have their respective significances, like love or mating parade, communication, removal of the parasitic shells, zone marking, intimidation, inspection of the neighborhoods, etc… They offer especially a breathtaking choreographic spectacle.

In addition to these jumps, they express many other social behaviors which make the happiness of all those who go there. As mammals, humpback whales breathe using their lungs. This breathing thus forces them to get regularly out of the water. When they reach the surface, they expel through their vent the air coming from their lungs; and their breath usually causes a genuine water jet of more than 2 meters or form a cauliflower shape cloud in the air.
The emission of their breathing is followed shortly after by the appearance of the dorsal, squat fin. This one remains visible when the animal makes the round back to start another dive. It is with this gesture of round back preceding the diving that the humpback whales owe their name. For wild sound’s adepts, you will be whispered by the humpback whales with their long complex song. During your boat safari along the sea of Sainte Marie, the whales master keys of ballets are accompanied by serious ceaseless notes made up of quite distinct syllables. The notes which they emit have a very variable amplitude and frequency. It also presents repetition and series of coherent sequences. These whales do emit songs only during the mating season and these songs can last for days, weeks and month. The significance of these songs is not very clear yet its perfection achieves the unanimity among all faithful listeners coming from all the four corners of the world. Some think that they are songs of seduction.

The songs are very specific from one whale to another, from one area to another and from one group to another; and a whale’s personal song change little by little all along the years. After a decade, a whale no more emits the same notes which it used to emit before. The mechanism of the humpback whale song is still hidden behind a good number of mysteries and of unknown because these animals do not have vocal cords. How do they, then, manage to produce their songs? This question still remains unanswered.

Compared to other Cetacean species which tend to be increasingly rare, the humpback whales population is reconstituted more easily because they generally give birth every three years. It is not rare also to see certain females give birth to baby whales two years in a row. The gestation is about eleven month period.

At birth, the baby whale measures 4 to 4,5 meters with a mass of approximately 700 kilograms. During their first six months, they depend exclusively on their mother’s milk. It is after that six months period that they start to nourish by themselves but they will be nursed until they reach their first age. Before leaving their mothers, these baby whales are initiated by their mother in the hot seas. You can observe the protective behaviors of the mother whales and initiations of the baby whales during the festival “Zañaharibe”. The sexual maturity of young whale arrives at the end of five years and they reach their final adult size, 16 meters length with an average weight of 40 tons, after six years. These whales can live up to half a century.

But Sainte Marie is not the only place where one can meet them. Maroantsetra is also an ideal place like Anakao in the South and the reserve of the Cape Sainte Marie from June and even until October.