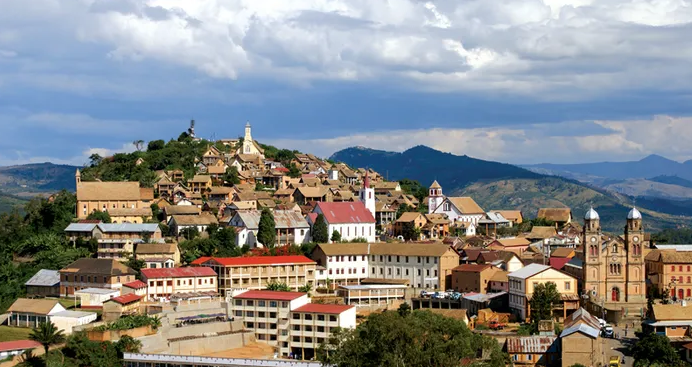 The name of the city means, the “city where one teaches the good”, which proved to be a civilizing mission of the people betsileo to honesty.

Situated four hundred kilometres of the capital on the road towards the South of the island, Fianarantsoa was built in 1830, and it was also built on a set of small hills and equipped with a small lake, seems almost a counterpart of Antananarivo.

It is however less populated and its inhabitants, Betsileo in majority, country people from the surroundings, seem to take life on the good side, so much they have the air nonchalant and prolix.

The hard agricultural work does not certainly frighten them, as the terraced rice plantations in the neighbourhoods prove it. It however seems to have taught to them that nature takes its time to mature the fruits of the ground, a lesson which points out the proverb “no need to run, it is necessary to leave at point. ” One has sometimes the impression that they employ about fifty words, where the official Malagasy language or that of Antananarivo uses twenty of them. That does not have anything astonishing, because one their large kings towards the end of the 17th century, Andriamanalina, remains a model of the Malagasy art of public speaking. It is however the town of Ambositra, located about hundred kilometers north, which deserves the reputation to be a country of chatterers.

Talking about religion, it is definitely more catholic than the Presbyterian Antananarivo with its eighty Protestant parishes; the city is dominated by a statue of the Virgin Mary, less imposing than Christ of Corcovado of Rio de Janeiro, but perched on a cliff side, which is seen from all the different part of the city. It is not really astonishing, taking into account the immense efforts made by the French priests to evangelize all the area. However, it is all the pallet of the Christianity which developed there, in spite of an annoying recent incident of religious intolerance because the city does not count less than about fifty church buildings, without forgetting the Lutheran faculty of theology, the catholic and another Presbyterian seminars.

It is significant that the principal religious buildings occupy the highest tops. Fianarantsoa is thus a pious city, to this list is added the village of “Soatanana”, a village creates in the 19th century by a missionary who brought the apostolic religion. Everyone there is dressed in white and a passage in this sizeable place could teach to us much from things beyond what we hope for.

The lower city, it, is a commercial zone strewn with educational establishments and bookshops. Indeed, being the outlet of a railway leading to the East coast and draining a rich agricultural zone, the city is still little industrialized, although it was for a long time well known for its craft industry of raffia basket and mat making.

On the other hand, its inhabitants seem very attracted by the sector of the services, like other Betsileo which seem less and less interested by the public office or the dentistry which used to be a favorite in the past. Fianarantsoa has just added another cord to its arc: which is nature conservation, by the means of an important national park supported by a large American university, which almost supplanted the balneal and thermal activities of Ranomafana village. From here, the tourist can also move towards the vineyards of Isandra and Famoriana or the tea plantations of Sahambavy, the single one and vast place where tea is cultivated in Madagascar.

The gastronomy amateurs also praise the Ivoamba cheeses of which, with their statements, approach best French Brie and are worth them. Sports lovers will appreciate the important stadium of the lower part of the city, although still very few disciplines are practised there. If not, one will be able to always practice walking to visit the higher part of the City in particular and to enjoy, here also, a very attractive panoramic view.

The staircases and the small lanes will be less difficult than the ones in the capital, pollution will be almost non existant and the permanent freshness of the climate makes it easier.The activities which one can make in Fianarantsoa are numerous, for instance the dugout trip on the Mahatsiatra river where the pleasure of a good bath followed by good picnic. Let us also speak about hikes in the mountain to explore the caves of Mitongoa….