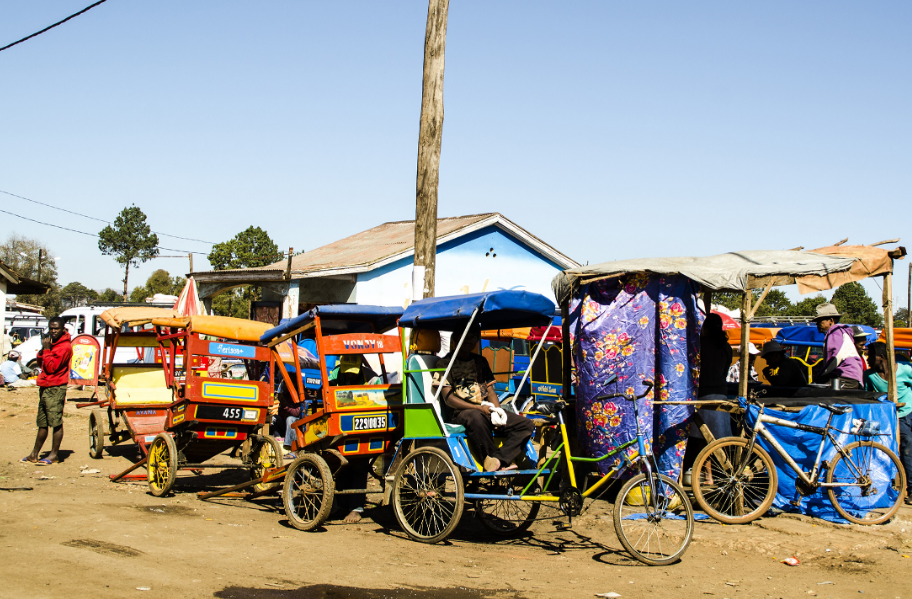 The name of the city comes from the contraction of the Malagasy words “Any sira Be” which simply means where there is much salt. Salt in question comes from the presence of minerals in thermal spring waters which are numerous in Antsirabe.

This one is a very pretty and very clean city, could be the cleanest in Madagascar. Its broad large avenues are shaded and bordered by jacaranda trees. During the flowering season, these colorful plants make the city even more charming with all the jacaranda trees purple flowers layers associated with rickshaws, dominated especially by the sharp orange color, gives a very particular stereotype and an exceptional key. Here, the air is almost pure contrary to Antananarivo where the exhaust fumes belong to the daily life. In Antsirabe, many of the population privileges the non- motorized means of transport that are the rickshaws. Currently, this city counts nearly 2000 of these two wheels and is regarded even as the Malagasy city which has the strongest density of rickshaw. The two wheels are the most practical and ideal way to pay a visit of the city, with a moderate price and a maximum of assured pleasure. The advantage of this means of travelling is that they are ready to be used any moment of the day and the pullers can be also used sometimes as guide.

It is said that name “rickshaw” comes from the expression formerly used during the French colonial community who were accustomed to borrowing it. Previously, the rickshaws of Antananarivo with its up and down hills were drawn by two people, one pushing and the other one pulling, and during the climbing the quite fatty passengers were accustomed to not only speak but to shout to the person who pushes by using the expression “Push! Push! ”.

The town of Antsirabe is the city of water because of the presence of its many medicinal springs and thermal sources of warm water like the Vichy water. There are seven of them knowing both Ranomafana (I and II) which literally means “warm water” in Malagasy language, Ranovisy which is the translation of Vichy water, Antsirakely, and the hospital and Sahatsiho. These sources are already exploited since nearly one century. One of the products of these sources is bottled and sold under the name “Visy gasy” which is very appreciated because of its therapeutic virtue. The city is thus baptized “Malagasy Vichy”.

The lakes should not be missed, the two most known tourist lakes will be quoted and which make the wonders of Antsirabe are Andrikiba and the extraordinary and mysterious Tritriva lakes.

The lake Andraikiba is 7 km from the city. Of a circumference nearly 5 km, one can easily tour it by following the little path surrounding it. Formerly, this lake was an important center for water sport activities. It constituted the meeting place for sail board adepts. The trace, like the structures, of this ostentation time is still visible there.

After Lake Andraikiba, one borrows a track to reach another lake, more spectacular, and full with myth which is the lake Tritriva. Before even reaching it, one can see, on the road, the Tritriva Mount starting from the village of Belazao. Before entering the lake, one must discharge a small royalty. It is also announced that one can approach the edges the crater by car. This Crater Lake with its volcanic landscape is formed by following deep and impressive collapse. Nested at an altitude of 1881 m to the hollow of a small mountain, Tritriva has very abrupt walls. The rocks facing its border make it possible to have a splendid and vertiginous sight on the entire lake. Because the depth of this lake is more than 160 m, its water takes a darker and very dark appearance. This lake full of legend and myth releases a strange impression.
In addition to these two lakes, one can also make an excursion up to Ivohitra, a hill dominating the city at 1.651 m of altitude. It promises a vast panorama on the volcanic landscapes of the Highlands, the city and all the area of Antsirabe.

Lastly, one cannot be bored in Antsirabe, there is much to see because many things are done and manufactured there. The local population is not unemployed and a small tour of the different craftsmen workshop is possible to admire their knowledge such as the “candy gasy”, traditional candy workshop. One can also visit various workshops producing miniature rickshaws and bicycle , a natural fiber weaving workshop using wild silk, raffia, and sisal, embroidery workshop and small transformation industry of various objects with zebu horn, and without forgetting the fine gem stone cutting workshop.

This wonder of nature made up of two small islands is surely the two most beautiful islands amongst the Mitsio archipelago.