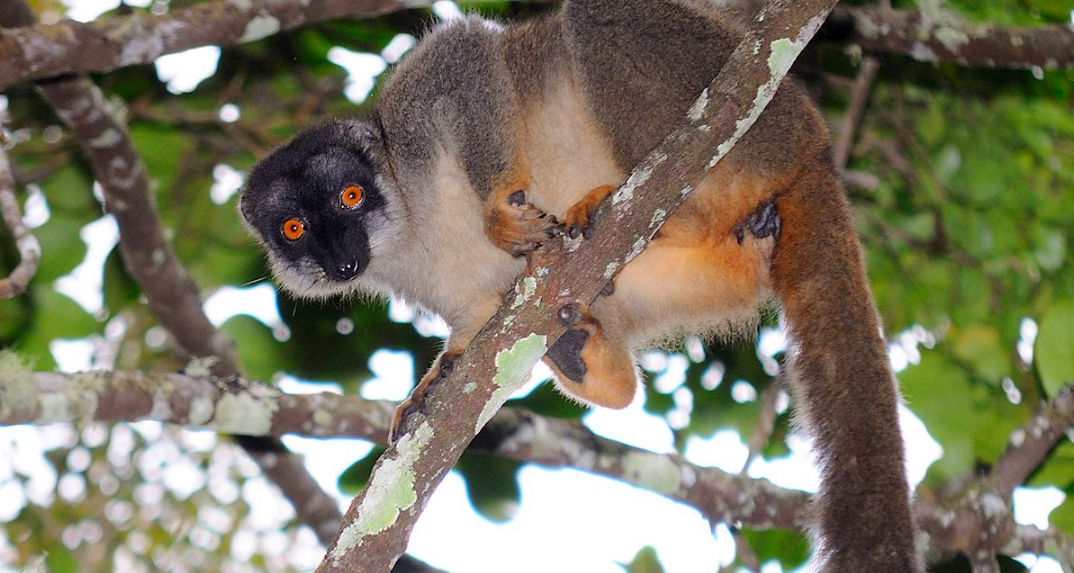 The tourist attraction of Andasibe/ Périnet remains in lemurs and birds watching. An easy walk in the forest for the contact with nature fills us with ease, but the meeting with its animals which cannot be found elsewhere is more rewarding. The park gathers two distinct reserves: Mantadia reserve on a surface of 15500 ha and Analamazaotra reserve with its 810 ha.

This area has two names: Andasibe-Mantadia and Périnet. The source of this latest one comes from the French engineer Périnet who took part in the railroad construction connecting Tananarive to the east coast of the island. Starting from Antananarivo, going eastwards following the National Highway 2 , through some remnants of Eastern forest , the park is located about three hours time from the capital city, which is to say about 140 km. From the opposite direction, starting from the East coast, it is about 220 km. In spite of the existence of railroad and various railway stations crossing the region, the railway line is no more exploited since years, because almost everything is driven from the east coast up to the capital. It is one of the most visited parks in Madagascar because of its closeness of the capital city but because of the diversity of its fauna and flora.

It is formed with a primary forest, comprising some 10.000 ha which are almost intact, with hardly some trails. Visitors must be accompanied by guide to explore it; but it is so to speak a gold mine as it is possible to meet animal species such as mammals, reptiles and birds seldom
The forest is separated by the road: on the right side some brown lemurs (difficult of approach) can be seen and on the left side, with a little chance, one can see the diadem sifaka or simpona with its golden color, and almost certainly some indri (which has much darker color than those of Analamazaotra). They get more and more at ease as they are getting accustomed to the human. Mantadia has some good tracks, even though some of them are of abrupt offering an admirable vision of the whole of the forest and the interesting view point is very good for bird watching, such as the pitta ground rollers or the red throat coua. It is an amazing place, but you must be in excellent form.
There are three important tracks: The best, of 14 km, is the most favorable for observations, but there is another one for about two hours hike which bring to a water fall, a cascade and a sacred lake. Mantadia reserve also contains several species of orchids, waterfalls and natural swimming pool where the neighboring population also practice some of their ancestral rituals.

Analamazaotra reserve is famous for its lemurs “indri indri” which it protects in major part: it is the largest lemur of the island with a powerful call which animates the forest. It measures about approximately a meter, with hardly a visible tail, black and white marks and a face similar to that of a surprised bear cub, the indri Indri looks more like a little panda. The long posterior legs are very powerful and an indri can jump off 10 m, carry out a half-turn in the air and be turned over in the open air to observe its enemies from up far. And you will be the invader there: almost everyone can see indris in Périnet and the majority can hear them. Because in fact it is that call that makes this animal extremely special. The majority of the other lemurs just make some kind of growls or cries, but the indri sings. It is an amazing very high call halfway between the whale song and a police siren that can be heard for more than three kilometers around. They are rather specific in their songs: If you are in the reserve between one hour and two hours after the point of the day or little time after the twilight, you will have chances to hear them sing. They can also sing around their nap time or before going to sleep on the top of the trees. These calls are interpreted as being: the communication call mentioning their presence in the vicinity, the warning calls for dangers (like the presence of carnivore or raptor), or the love calls which they do during the mating season. Let us note that this lemur cannot survive in captivity. The Indris are monogamous; they live in family of small groups of approximately up to five animals. The births take place in June, every two years. In Malagasy, the indri are called “Babakoto” which means “Koto’s father”; according to the legend, a boy called Koto went in forest to gather wild honey, but which he was seriously stung by bees. Having lost its balance, he was caught up by an indri which brought him back on its back at his place. It is forbidden to kill an indri because of that.

The altitude of the Andasibe area varies from 900 with 1250m. The relief is broken, thanks to the numerous rivers which run there and which leave a landscape of a single beauty. The climate is of wet and rainy tropical type. The rainfall is of 1700 mm for 210 days with an average temperature of 18°C. The hottest months are from November to January with a temperature of 27°C, it can be very cold between July and September, the temperature can reach the 10°C, and it rains abundantly between January and Mars, with abrupt and inopportune drizzles. Strong walking shoes and raingears are recommended during the visit.

As a whole, there are nine species of lemurs in Périnet (including the aye aye), but you will not see them all. One can sometimes meet groups of gray bamboo lemurs, diurnal ones which by the bridge on the way to the Green Lake and some brown lemurs or sometimes an avahi (woolly lemur) in the fork of a tree. Nocturnal visit is also possible in Perinet to see some of the nocturnal lemurs. Guides are experts in this field to seek the small mouse lemur or the small dwarf lemur which hibernates during the cold season. The lemurs form only some of the creatures which one can find in the forest of Périnet. Tenrecs can also be found there such as various insects, several frog species, chameleons, hedgehogs as well as spiders and reptiles. By misfortune, the latter are getting increasingly rare, because of the reptiles illegal traffic. However, tree boas are still common and remain placid. This park is still the ideal place to observe birds especially very early in the morning. Certain worthy of interest are the asity, the coua and the vanga. Unpleasant aspects of Périnet among the vegetation especially after a recent rain are the leeches. Inserting trousers in the sock will help to avoid leeches to reach your skin and use insecticides. So despite everything, if a leech went through, a little salt will make him release. The various hikes take us along marked and safe trails bordering various rivers and several small cascades, to discover the single flora of the reserve. The flora is characterized by luxuriant tropical forest vegetation, and many species of tree ferns, orchids, epiphytes, lianas crowned, and dwarf palm trees, a hundred numbered trees which can reach a height of 30m, medicinal plants. An orchid park also exists there and these plants flower especially in flower in October and November. The Park also has a Interpretation Center, as well as picnic area or camp-site.

This area gathers 3 ethnos groups of which Betsimisaraka, Bezanozano and Merina. They are especially farmers who practice slash and burn cultivation and the essential base their resources is the forestry development and mining.

Several hotels of any category offer their hospitality unless you just come for a day excursion and going back to Antananarivo for the night.