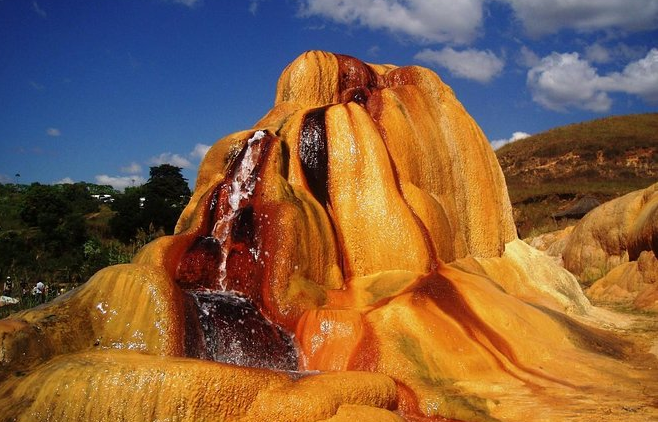 Ampefy is a small typical borough on the banks of Itasy Lake. For those who prefer relax, resting, fresh air, far from the crowded beaches, discover this small haven of peace nested in the area of Itasy and which offers many treasures of curious forms.

Ampefy is with a little more than 100 kilometer in the west of Tananarive. It only takes two hours to reach it. It offers splendid volcanic landscapes, very undulating and different from the usual image of the Great Island.
The area of Ampefy is situated on a volcanic substratum whose characteristics are the domes, lakes and rivers which present rapids. Because of its altitude, Ampefy offers splendid panoramic views on all the surrounding volcanic landscapes. Apart from the extent of the lake Itasy, it is also possible to see other volcanic lakes such as the lake Antohomadinika, or Andranoratsy, or ponds and many marshes, most of which are lakes of crater. These lakes are ideal places for fishing lovers, hunting and water sports like pirogue ride. The Lake Itasy is the third lake of the Great Island, from its surface which is 3.500 ha. Compared to the other lakes, its size is a major asset for pirogue ride. This lake has a very evocative name which literally means “basin”. It is with 1221 meters of altitude in the middle of a volcanic area of the central highlands. It is not very deep because its depth seldom exceeds the 6,5 m. The Lake Itasy was formed from a volcanic eruption. The impressive flow of lava projected by the volcano would have blocked the valley and imprisoned the water.

The lake gets its water from the Lily River with the beauty of its extraordinary waterfalls which achieved unanimity of all the tourists who already had the occasion to have a glance at it. The edge of this lake is a place of predilection of many water birds of the Malagasy central highlands. It thus shelters an important quantity of water birds. The Lake Itasy, a natural water level, whose formation and localization are to be put in relation to old volcanoes and its crater, represent an important asset for the inhabitants of Ampefy, also as regards aqua cultural, agricultural, and especially tourist. To view all the wonders Ampefy offers, a little stroll is possible to join the Lily waterfall. One then cross volcanic hills with mainly small villages with thatched roofed red mud houses, typical of the central highland. While going forward, one meets very discrete peasants who are posting a broad smile and full with generosity. After few minutes’ walk, one starts to hear the buzz and the crumpling which becomes increasingly strong: it is the Lily waterfall. It pours its water from its 23m elevation which generates a large scum on water. This waterfall full of legend is well anchored in a splendid site bordered of green grasses very developed by the water evaporation of the waterfall. The cascade offers a splendid and very beautiful landscape. One can even take few minutes of small bath in mountain water which is fresh and very limpid.

Before reaching the waterfall, the river crosses over rather desert volcanic landscape. In certain places, it crosses fields, often rice plantations, which are sometimes covered with light green grass or a field ransacked after a plough on standby for the rainfall. The contrast is very remarkable. The waterfall is located very precisely in the locality of Antafofo, in which all the villagers maintain it carefully. Here everyone, even the little children, is able to report the history of this waterfall.

According to the legend, its name comes from a “vazaha” plantation owner’s little girl’s name “Lily” who lived at the small village of Antafofo, about forty years ago. One day, the little girl had an accident on the river and it occurred that she disappeared. All the villagers thought she was carried by the current and they started to excavate everywhere, in vain. Consequently, they decided to name the waterfall after the little girl’s name, and then after with the river itself.

After the waterfall and the Lake Itasy, the stay with Ampefy also makes it possible to enjoy the spectacle offered by the Analavory Geyser. By a hike or mountain bike ride it possible to reach the geyser. This one is situated from a few kilometer of Ampefy. It offers a gushing spectacle of many sources of a few high meters. With time, the effervescent water rich in minerals (suffers and silica) gave birth to reds and copper colors round form concretions. The Geyser is a spouting spring in a hot water and vapor spray. The gushing is discontinued. The quantity of water propelled in only one eruption can be a few deciliters. This phenomenon of gushing is caused by the contact of water with the volcanic rocks which remain always hot. When water arrives at boiling stage, it dilates and goes up on the surface. There is also a water vaporization which is dilated when it spout out. The force of expulsion and the spectacle offered depend on the depth of the reaction. Because of the fertility of this volcanic area, Ampefy offers small villages encircled by eucalyptus forest dominating extended cultivated area like papaya , peach,… and green rice plantations.

The list of products which comes from this area is very long, namely tomatoes, tobaccos, apples, avocados, manioc… and garden products. In addition to these products, this zone essentially lives, in addition to tourism, of fishing; the Lake Itasy is full of fish. Ampefy is a large fish producer raised in the lakes or the marshes, like the tilapia, carps, eel… These large fish, which can easily reach 4 kilos, are frequently seen in the restaurant dishes of Ampefy. Ampefy also have craftsmen who work volcanic stone to give all the forms which you wish, you can have one with your footprints.

The national park of Marojejy which covers the solid mass of the same name is located in the North-East of Madagascar.

The national park of the Amber Mountain was created in 1958, when the French colonial government recognized the unique nature of this volcanic massif and its forest.