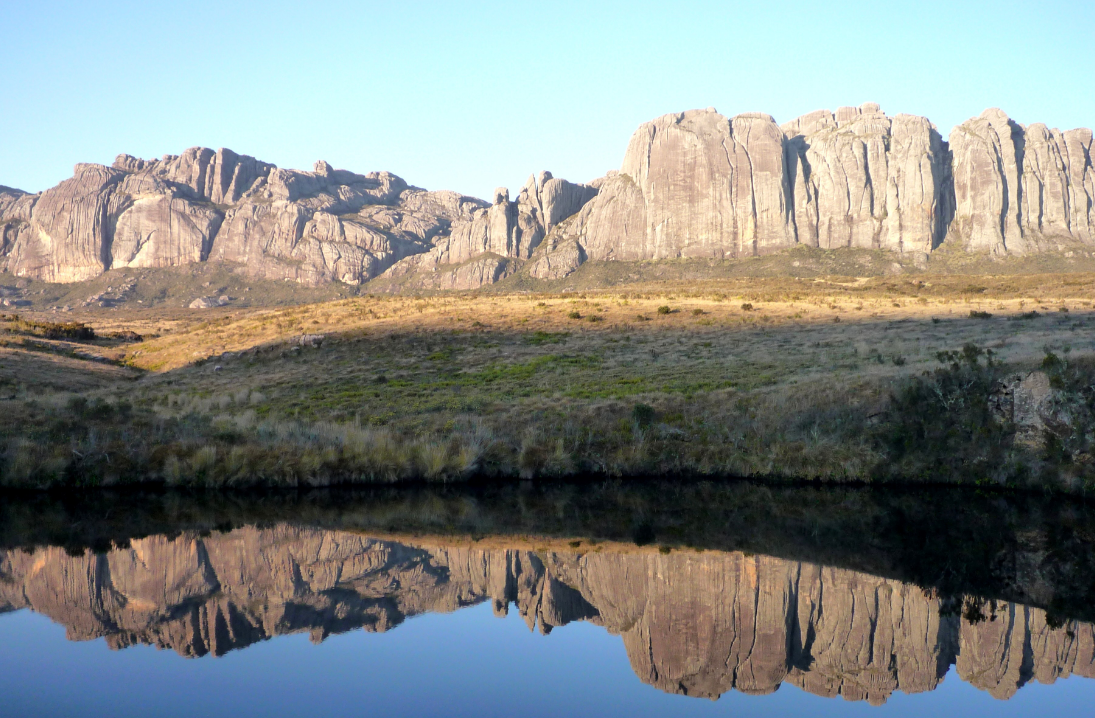 Andringitra is a granitic massif of a surface of 31160 ha. The tourist interest of its national park comes from following activities: hikking, trekking, climbing, discovery, panoramic sight since the top, returned possible thanks to 100km of tracks of hikes fitted out in a picturesque set of mountains.

This solid mass of 31160 ha located in the old Province of Fianarantsoa and now included in the area of High Matsiatra, is in the valley of Namoly about 97 km from Fianarantsoa. It is formed with a granitic solid mass resting on a crystalline rock and sandstone; it is supporterd in the West by the gneiss of Amborompotsy and in the East by the granite magmatic. Composed of a series of rocky chains with many peaks, its altitude varies from 500 to 2650m high with a climax of 2658m: the Peak Boby the second highest and accessible peak in Madagascar, called in Malagasy language “Imarivolanitra”, a name which means “touching the sky”, a sky which is always cloudy even when the neighborhood is sparkling with a radiant sun. The next peak is called Peak Bory culminating at 2630m.

Three various climates conditioned by the altitude and the orientation of the slopes reign on Andringitra. One is tropical wet, dominated by a strong rainfall reaching 4000mm per year and an average temperature of 21°C.
The Center, which is the tourist zone of the Park, has an altitude tropical climate. The weather is very cold from mid June to august which is the southern winter, when the temperature can fall to 0°C and with a usual rainfall of 2390mm per year.
Lastly, the Western slope has a tropical climate at dry season with an average temperature of 24°C and a rainfall of 1300mm per year.

The tourist interest comes from the following activities: excursion, trekking, climbing, discovery, panoramic sight from the top, made possible with 100km of trails arranged in a picturesque decoration through the mountains.
The five hiking trails hereafter are offered:

Asaramanitra: 6km in 4 hours. Waterfalls surrounded by legends. Caves hidden under a green forest which was used as shelter during the ethnic war times but also as dens for zebu robbers.

Diavolana or full moon: 13km in 10 hours hike: through wild meadows of flowers, and orchids to a lunar landscape which deserves its name well!

Imarivolanitra or close to the skies: a 28km or two days round trip journey, it is the climbing of the peak Boby and the meeting with its high altitude inhabitants after crossing the grassy savannas.
Here follow is the main popular program:
Day1: 4 hours walk climbing up to 600m high to a Betsileo village passing 2 sacred falls and caves, plateau of the orchids at 2000m, the camping ground is at 2050m.
Day 2: Early morning departure to try to arrive before the clouds of the day, 8 hours climbing the Peak Boby up to 2658m. Beautiful sightseeing, rare plants and birds. Overnight camping. Day3: Descent towards the western slope towards Tsaranoro large cliff.

From the Eastern part, there is a view of Imaitso forest. A 6 hours hike through lunar landscape leads you to what is called the “extra terrestrial” camping ground, a natural swimming pool is also found along the way.

Imaitso or greenery: 14km in 8 hours hike. Vestige of a wet primary forest, a low altitude rain forest with small size trees with strong leaves which gives them ability to resist the dryness of the southern winter, such as “aloe of Andringitra”.

Isahavato or Stone fields: 15km in 8 hours hike. Climbing the western plateau while crossing planted zones of rare palm trees, with the possibility to admire the sunset and its natural swimming pool.

Material conditions: good walking shoes are required on rocky ground, hot clothing, rain gear, hat and flashlight. No need to take tents or sleeping bags which are available on the spot.

ETHNOS GROUP: in majority Bara people, contemplative stockbreeders and rather good farmers. Christianity seems little to have penetrated in the area, which explains the survival of various traditions sometimes considered to be pagan by the missionaries and pastors of the Lutheran faith. However, the natural resources and the biodiversity are precisely protected by spiritual beliefs like by various taboos. (Mystical Lakes and falls that it is forbidden to pollute or profane, sacred forest whose plants should not be gathered…)

FAUNA AND FLORA: Very rich in endemic species: It is the case for orchids of which about thirty species were inventoried. Varied and staged vegetation, from a wet low altitude forest: at 800m high trees measure from 25 up to 30m like the “canarium madagascariensis”, “Sloanea rhodantea”; then starting from 1200m high, “Podocarpus madagascariensis” in a wet mountain forest then after 1625m high, species like sclerophyllous forest of mountain dominated by fogs and clouds, which involves the formation of a low canopy vegetation of 5 to 10m. Rocks are covered with foam and lichens, herbaceous and woody vegetation.
The density and the variety of fauna decrease as altitude is gained. There are about13 species of lemurs: of which small Mouse lemur, the ring tailed lemur, the Rufus shining brown lemur. On the other hand there are 106 species of birds: the Salomon’s souimanga with its long hooked bill, the small fody whose plumage turns into bright red during mating and breeding season from November to March or the Atelonis ground roller. Mammals are also very important (26 species including 25 endemic ones): so carnivorous rodents but, to which Amphibians and various reptiles are added. It is observed that the variation of altitude involves a change in the ecosystem and natural habitat.
A fee has to be paid at the office from the National Agency of the Protected Areas Management (ANGAP) on the spot. A guide and porters are needed; they are available on the spot. Several campsites are also available.