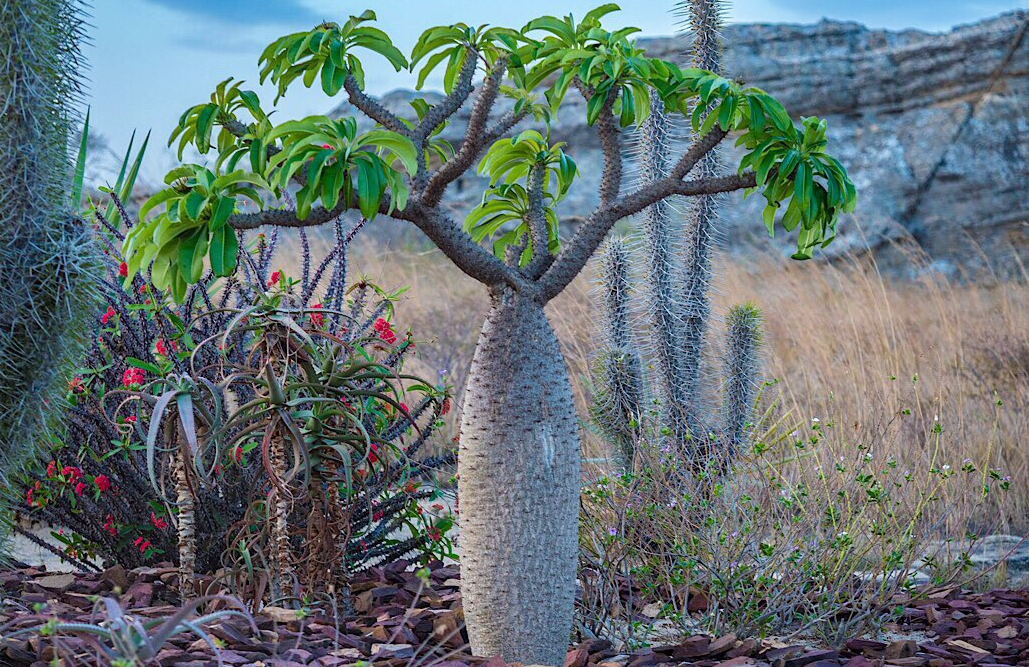 “Succulent plants” are among the plant types that have a very high rate of endemism in Madagascar. These plants grow well in the southern part of the island, a region that can be described as the Mecca of succulents on the planet.

There is a whole forest of succulent plants in the Southern part of the Island because of harsh climatic conditions and very poor soil characteristics, reduced to sand. However, this does not preclude their presence in other parts of the Big Island, such as the more humid eastern part and the drier western part. The succulents of Madagascar are composed of many families, but the most characteristic plants include the cactus, the lilies, the famous Didiereacée and Euphorbiaceae. The common thread between these species is that they can survive in arid environments by developing a system that is adaptive to the creation of water storage that offers them a fleshy appearance at the stem or leaves. They also adopt the system of reducing their leaf size. 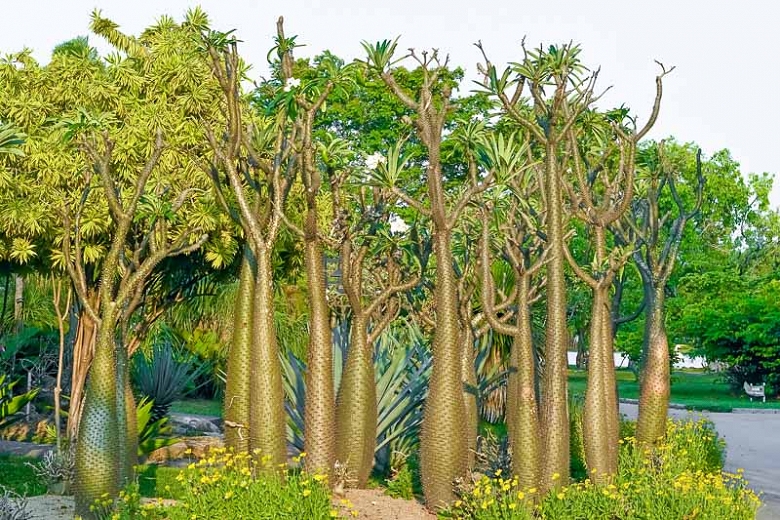 The cactus of Madagascar

Cactus or Cacti, a plant family consisting almost entirely of succulent species, is very active in Madagascar, particularly in the south. These plants have an integral part in the plant formations of the southern part of Madagascar. They are well known, highly developed and very appreciated by all tourists. In this region, the cactus is commonly called “Raketa” in Antandroy or vezo dialect.

This vegetation is highly developed because of the semi-arid climate that still exists there. To survive, cacti adapt by storing water in one of their parts, namely the stems, leaves or roots. This form of adaptation that they adopt gives them originality and beauty. They can therefore live in a condition of extreme drought even though rain only falls a few days a year.

Identically to Didiéracées, Cacti are often thorny. The leaves reduced to thorns decrease the evaporation surface of these plants and allow them to spend the minimum of water. This reduction of the evaporation surface may explain the thickening of the epidermis of these plants, which can also be covered with wax. The thorns, which originate from the adaptation to drought have multiple functions for these plants. They generally protect plants against animals. They also protect the epidermis against the heat of the sun in this very arid area and the drying wind called tsiokatimo. These thorns also capture the morning dew, which constitutes the vast majority of the precipitation in this area.

During their blooming period, they offer flowers, often incredible, even if they only survive briefly. Some species, considered as nocturnal varieties only flower during the night. The diurnal species are the ones that offer much more flowers of rare beauty and that are silkier. The conditions under which they live during the drought period greatly affect their flowering. They offer many flowers that are more spectacular if they grow in areas with very little water and with much light. The fruits of the “Raketa”, which are edible, help people who live in the southern part of Madagascar, where drought reaches its peak and where food is scarce. 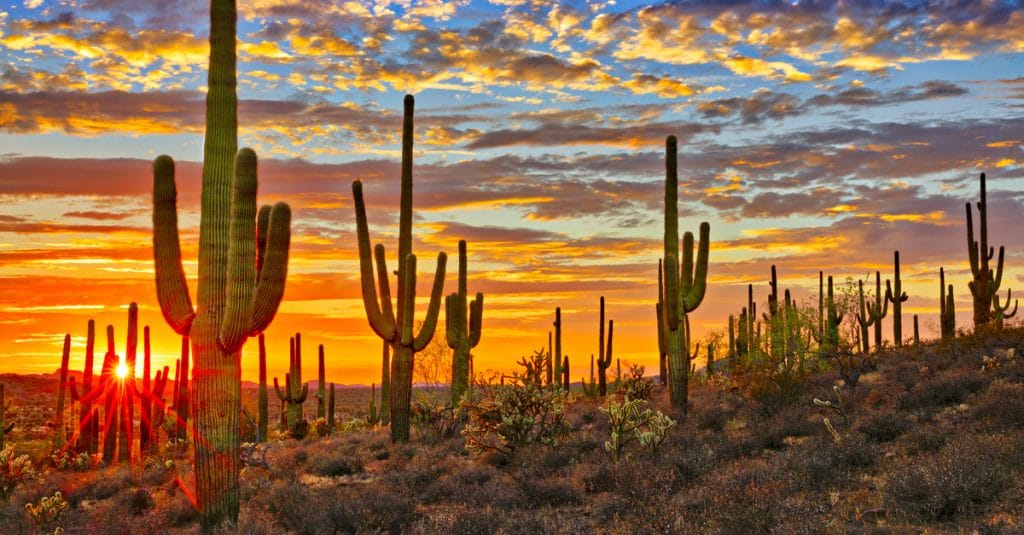 The aloe plants are also among the most prevalent in Madagascar as they originate from the country. They are present in the centre, the South and the South-west. With soft fleshy lanceolate leaves, aloes have small tubular flowers ranging in color from red to yellow assembled over the long flower stalks. These plants are mainly known for their healing virtue and their use in the world of cosmetics. They have the same characteristics as the Moringaceae families. The latter with a species called Moringa is also present in the south of the island. It has the appearance of a baobab. The Moringa is now known as a very good food supplement.

The Didieréacées are plants that attract thousands of tourists in the south of Madagascar. You can only enjoy these plants in the southern part of the Big Island because they exist nowhere else, so they are endemic to this region. Their shapes, which are often reduced to a single, upright, rather long and thin stalk (stem) supersede any other species that constitute the vegetation of this area. The chlorophyll function of these plants is generally transferred to the stem. It is very thick because of the water supply inside of it.

From the bottom to the tip of these plants, the stems are covered with thorns and they bear a minimum of leaves in order to adapt to drought. Depending on the variety, the leaves and thorns can be very tight and small as Alluaudia ascendens or dropped and larger (Alluaudia humbertii). Blown by the twilight wind, these plants, very visible at first glance, offer a unique show to the world in a Western setting. They are the most amazing components of the formation of the Southern bush. The peculiarity of these plants is that they have a separate sexuality, ie there are male plants and female plants that grow next to each other. The other species of Didiéracées that cannot be overlooked include the Didi madagascariensis, the Alluaudia procera and the Alluaudia montagnacii.

In addition to these species, the Euphorbiaceae, should not be neglected because of their beauty and their diversity in Madagascar. The species of Euphorbiaceae that are the most noticeable include the Euphorbia oncoclada or “bush-sausages,” and the Euphorbia Euphorbia alluaudii stenoclada. The latter resulted in a great assembly of multidirectional thorns.