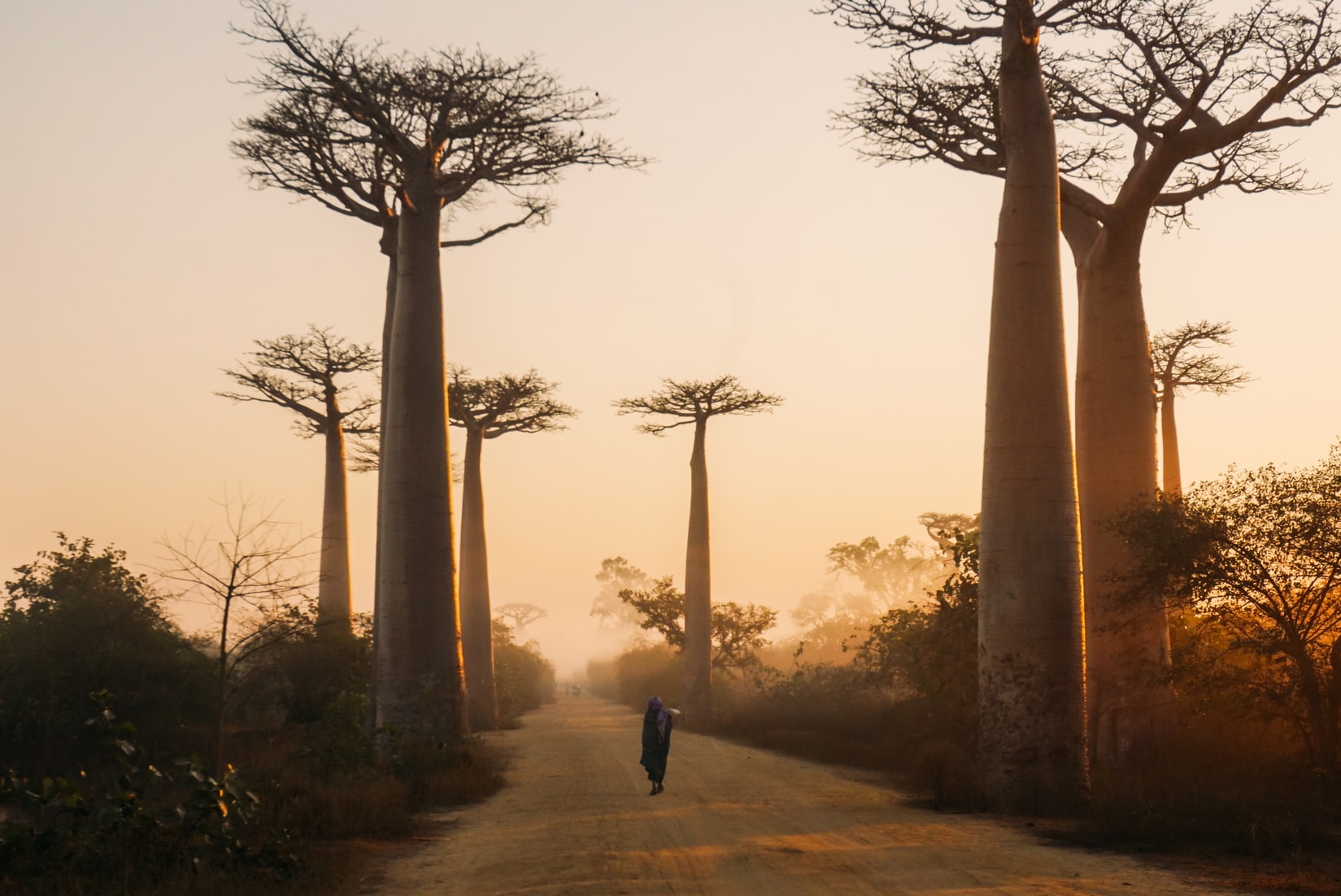 From 700 km of Antananarivo, following the National Highway 7 through Antsirabe, reaching the south western coast, you arrive at the edge of the Mozambique Channel in a large fishermen village promoted to become a city port.

In Morondava, the sea does not cease nibbling the coasts which ended up conceding almost two km of coast and fertile plain in one century and half. In spite of the damage it causes, the Mozambique Channel still remains the principal possible way for the Sakalava of Menabe to leave their den with their sailing dugout canoes or wooden boats called goélettes. The rhythm of life in Morondava is animated by fishing (fish, cucumber of sea…), the culture and gathering of wild products intended for sale such as the raffia, wood, wild honey, the block of wax locally called “lasira”… These products constitute the currency of exchange for daily life products people need in the “Dokany” or “karana” or Indo-Pakistanis store”. The latter, as in all the Western part of the Great Island, dominate the trade with Morondava.

Two religions cohabit in Morondava: a relatively tolerant Islam Sunnite and a rather rigid Lutherian Protestantism. They are combined to give to the city a rather heavy atmosphere which however is attenuated as soon as you get closer to the peripheral districts and the neighbouring villages.
These latter seem indeed more inclined to have fun in festivity and to enjoy the present life at great reinforcements of drinks much stronger than simple lemonade. Morondava shelters people with very particular customs and habits which only belong to them. That makes this area so special and unique in its kind.

Many royal tombs or not, are the subject of curiosity of thousands of tourists. It is the Sakalava funerary art which makes these tombs very attractive. For these people, the relationship between the dead and those who are alive belongs to everyday life. Among the Sakalava society, “Andriana” or kings deaths, especially, are closely related to life because that constitutes the first intermediary between the terrestrial life and the life of beyond. For this reason the worship of “tromba” or worship of possession is much venerated in this area. These tombs are mainly built out of wood. They seldom comprise tomb stone. The royal tombs always comprise crowned relics. The characteristic of these tombs is that they are decorated with frescos and funerary sculptures telling the life of the deceased ones, rather naive but often impressed of a belief of erotism, erotic statues which mean much for the Sakalava because they symbolize procreation and life. They are anyway the witnesses, depicting a population without state of heart, but full with sap and strength.

One of tourist attractions of Morondava consisted in visiting these tombs (and to photograph them), but it is from now on in discredit near villages owners of the tombs because of many thieves of funerary posts made in the past years by foreigners without scruples just eager to bring back authentic and negotiable memories for various European or American museums and private collectors. The various tombs which are the subject of this tourists rush are the royal tombs of Mahabo, which is about 42 km of Morondava. Then, there are the tombs of Mangily, the tombs of Ambato sur Mer and Kivalo while passing by the tombs of Lovobe and the tombs of Maneva. Some of these tombs are accessible only during the dry season and some of them are accessible only in dugout canoes.

Another traffic which devastates the surroundings of Morondava is related to threatened species of terrestrial tortoises which are able to survive several days without eating, which makes it possible to the traffickers to put them in boxes at the bottom of their bags and to take them along like luggage of compartment.

Morondava’s attraction lies in terms of tourism within its strange framework of coasts used by marine erosion and the exceptional baobab trees vegetation, symbolized by “the alley of baobab trees” celebrated by paintings, postcards, stamps and banknotes. Located at about twenty kilometer on the Highway 35 leading to Belo sur Tsirihibina, the alley consists of a succession of arranged large dimensions of centenaries baobab trees from both side of the road. They are mainly made up of Adansonia grandidieri specie. During flowering season, these giant trees give a breathtakingly pale yellowed flowers landscape.

From a distance of nearly 60 km in north, Morondava offers also a very typical deciduous dry forest of the south-western area of the Great Island: the forest of Kirindy. This forest presents many vegetation species dominated by the species of large baobab trees. The species of other mix size baobab tree species, euphorbia species and which constitute a place of predilection for thousands of lemurs, especially the white sifaka.

From the economic point of view, Morondava has a prosperous future which seems to be reserved to him by the oil research carried out in the surroundings, as well in Shore as offshore oil rig, of research which, until now, had been prematurely abandoned because of the cost of the extraction; they were recently taken again, with the rise out of arrow of the price of the rough barrel and the discovery of new technologies promising a greater profitability. American companies of the last years were joined by companies coming from avid countries of oil resources: United Kingdom, Japan or China.

Other reserves of fossil resources, neglected for lack of road infrastructures have been just given in exploitation to make up the energy deficit of the country and to stop the deforestation caused by the cutting trees for firewood and the charcoal manufacture for domestic use. Precious trees considered by others as material of fine furniture are considerably often used in kitchens to boil the pot. The enormous coal layers of Sakoa will thus be given in value and will be able to even provide domestic fuel after treatment to produce briquettes.