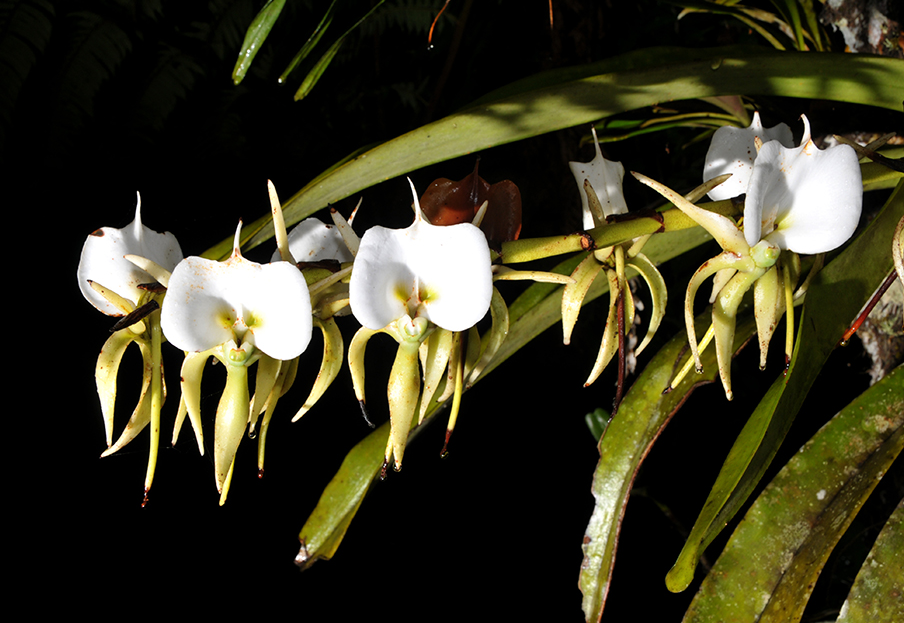 Orchids count nearly a thousand species in the Big Island from which 90% are endemic. These glowing orchids in the Malagasy forests find their respective originality through their various sizes, from the singular forms to the very mixed colors. To give a first impression of what awaits you in this country of endemism, some very rare orchid flowers, found nowhere else, will be described. Orchids can grow either in the wet Eastern forests or in the Western dry forests.
Among the orchids which open out their flowers in the Big island, the stars of Madagascar called sesquipedalian Angraecum are the most beautiful ones. These orchids which make the reputation of this country are very rare. Also qualified star of Betléhem, this plant épiphyte is seen hanging to tree trunks. This characteristic is due to the fact that it benefits from nutritive matters which are located on the surface of the barks of trees. In some cases, it is lithophyte, i.e. it develops on the rocks. Generally, the pin of sesquipedalian Angraecum is presented over a 30 centimeters length in order to contain its nectar. However, this pin can reach a 45 centimeters length. This orchid like Angraecoïde has very clean white flowers. Its spur is also lactescent. This species of orchid is inseparable from the butterfly called Xanthopan morgani predicta which is responsible for its pollination. Its horn is of the same length as the spur of sesquipedalian Angraecum.

To have the opportunity to appreciate the flower of the Angraecum sesquipedal, you must come for its flowering period which extends from June to November. With the species called Angraecum eburneum, they are the rare orchids which bear flowers during the southern winter. Let us note that this species is threatened of disappearance. By visiting Madagascar, you will also be likely to appreciate Disperis imitations. This one is endemic to the country. This herbaceous generally develops on the surface of the ground. It can reach a height from 8 to 27 cm.

Disperis half-tone engravings presents two opposite leave centered on the stem. This last also supports the usually pink flowers of color. The flowers open out there by four with an average perianth from 1 to 1,5 cm. Disperis imitations meets on the area of the central highlands as in the south of Ambositra, Andringitra, Mont Tsaratanana which is the septentrional limit of this area. It often joins Eulophia hians, another species of orchids. Disperis trilineata has the same characteristic as Disperis imitations. The difference between these two orchids is in the height, the color of their flowers and the perianth which is of 6mm. The height of Disperis trilineata is to the maximum 15 cm and the color of its flower goes from the dull pink to the violet. It is located especially in the northern area of the island, on the level of Sambirano.

As for the Disperis tripetaloïdes, it is also herbaceous and develops on the surface of the ground. Its height reaches between 10 to 22 cm with two or three leaves laying out with different heights on the stem. The leaves are colored with the dark green and the violet of paler veins. The flowers of this orchid are with the average number of 3 with a tinted white pink color where the lower part of the sepals is striped with green or brown veins. It is noticed in small colony on the Western part (Bemaraha, Sambirano,…) and on the south-eastern point of Madagascar. Other kinds are also noticed in Madagascar like the Eulophia epiphytica and the Eulophia livingstoniana. Eulophia epiphytica is large a épiphyte with a hanging stem. This tubular stem is 1,5 m long and has leaves only on its upper part. The stems also have several hanging flowers with the lancéolée bractée from 3 to 8mm on its base. The flowers emit intoxicating perfumes and the perianth is yellow green. The spur is short, cylindrical and conical at the same time.

The Eulophia epiphytica is a species in danger of disappearance because of its rather restricted zone of predilection. It is found mainly in the extreme south-east part of the Large island and it decorates the trunks of palm trees raffia or Dypsis by rolling up its stem on the base of its leaves. The greatest colonization of this stunning orchid is located in the plantation of palm tree raffia and palm tree with oil not far from Fort Dauphin.
Contrary to the Eulophia epiphytica, the orchid called Eulophia livingstoniana has more extended distribution because it can be localized almost in all the regions of Madagascar. Its localization goes from the north (Amber Mountain) to the south of the island (Betroka), while passing by the central highlands (Fianarantsoa, Alaotra,…), the Eastern and Western part.

It has continuous acute leaves following a precise line. Its flowers, which appear during January to March, are very attractive. They are more or less large with a 5 cm length. The perianth is of a mauve color which contrasts with a beautiful red - purple.
The eulophiella roempleriana is the orchid queen of Madagascar. Endemic species, one especially recognizes it on a tree: the pandanus and one often sees it in the island with the Sainte Marie plaits. Big size in November, it bears a fushia color which illuminates your life. Let us not forget to quote the famous black orchid or the palm tree raffia of Madagascar, under its scientific name “cymbidiella humboti”. It has a black and yellowish green flower . We are likely to be able to admire it in December.

Lastly, the list is still long. Let us end it with the most coveted and most known orchid of Madagascar which is the vanilla known under the scientific name of Vanilla planifolia. It has a cylindrical stem. In the wilderness, it generally sticks to a tree or support. It produces large fleshy flowers. They have a yellowish color marked by a green trace at the base of their petals.

This orchid produces fruits which make the happiness of all the kitchens of the world. Most of its worldwide production comes from the Big island. 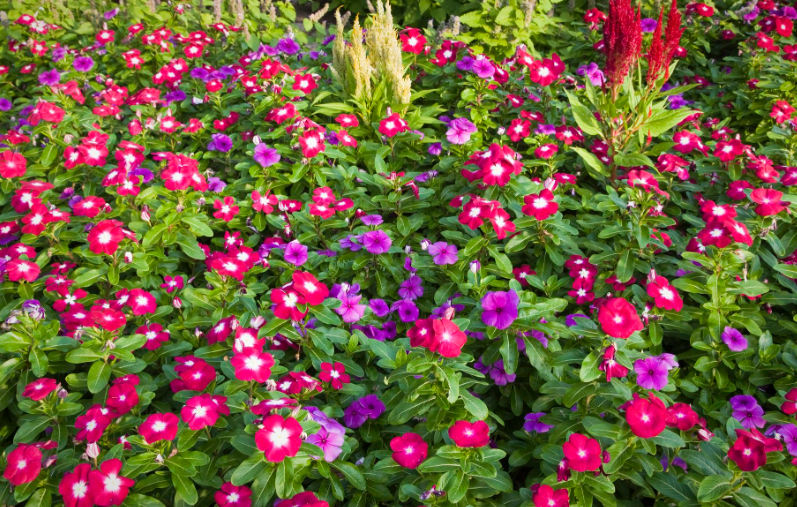 In addition to the orchids, the periwinkle is one of the flowers very characteristic of Madagascar. This flower is especially known for its therapeutic virtue. At the present time, it is widespread a little everywhere in the world but it originates from Madagascar.

The periwinkle belongs to the family of the the Apocynaceaes, i.e. with the same family as the frangipanier or the liana of milk…. It is perennial and produces flowers with very rough and discrete forms. Its flowers are of various colors going from pink, to mauve and to white with its five petals supported by a very fine stalk. These flowers have a rather strong scent.
In traditional medicine, this plant is used especially like a remedy against the diabetes, hypertension and cancer.

The wonders of Madagascar are inexhaustible to amaze you. They only await you to discover them. Special tourist tours can be established with everyone’s request.