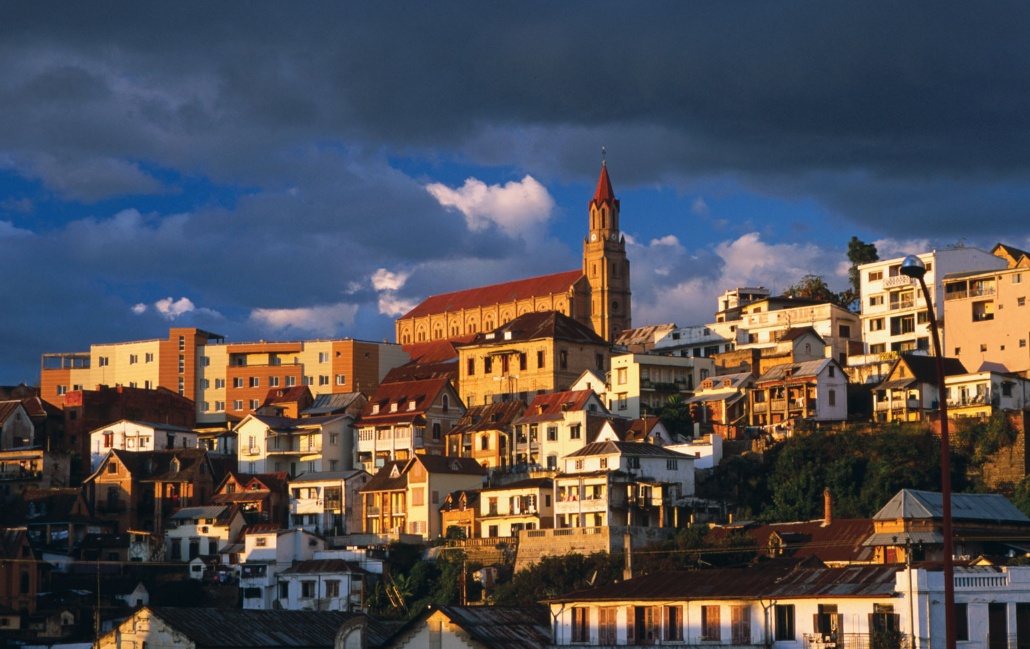 Capital of king Andrianampoinimerina (1785 - 1810) built at the site of Analamanga fortified village which he had just conquered, the city had been equipped towards 1780 with a garrison with thousand men and had been renamed “the city of the thousand”, literal meaning of the current name: Antananarivo. Today, it is familiarly called “Tana”.

Dominated by the remnant of the imposing “Queen’s Palace” which was entirely built out of wooden by French Jean Laborde and surrounded by stone walls by the English missionary James Cameron, known in Malagasy under the name of “Manjakamiadana” (where one reigns in peace) and destroyed in 1995 by a case of arson but in the process of rehabilitation with the assistance of the international community. The city, terminus of the principal air line was until a recent date the single door of entry for visitors coming to Madagascar by plane, and represented only as one crossing point, so that one did not know much about it.

For strategic reasons, its first king had located the heart of the city at the top of a steep hill and the occupation other hills was only achieved during the nineteenth century, followed by the expansion on the surrounding fertile agricultural plain , an expansion which continues at the present time without true town-planning. The topography of the site explains why the old city is made out of narrow streets for pedestrian use tangled up on the heights and hillside, where one can easily get lost while the recent districts, built in the plain, tend to have a squared plan, especially in what is called the “cities”.

Residence of the government and economic center, Antananarivo is modernized to offer all the amenities and the facilities required as well by businessmen in visit as by the investors. Thanks to its many different level educational establishments, and to the dynamism of a young population avid of education, it also offers an important potential of human resources. Those should still increase for the near future years as the population under 15 years old does not cease increasing.
The city has certainly lost for a few years some of its picturesque, in particular following the devolution of its Friday market with the white parasols, the “Zoma” that foreigners had baptised “the open largest market of the world”, but it still preserves, in particular in the Upper town, of the historical vestiges worthy of interest. Visitors who love sport can besides do the visit on foot by climbing one of its thousand staircases and alleys curving with cliff side, and enjoy at the same time the imposing panoramic view of the rice fields being spread out as far as the bluish hills of the four horizons.

If they wish, they can also benefit from the recent or renewed inherited installations from the Inter Island game of the Indian Ocean, in particular an Olympic swimming pool which, unfortunately, does not allow the lifting dives yet. But at a few minutes of this place, there is another smaller in size and equipped with a beautiful diving board. If not, walk is particularly healthy even with more than 1200 meters of altitude, with the proviso of not beginning in one of the two tunnels of the city, with the manifestly polluted air. If you however come between October and Mars, go neither too quickly nor for a long time because the heat is likely to dehydrate you more than necessary except if you have the chance to get soaked by one of our tropical downpours.

The appetite sharpened by these physical activities, tourists can taste the simple but abundant dishes offered by small popular restaurants or more required establishments offering a vast range of kitchens of all the countries, but leaning especially towards the Asian taste of Vietnam, China, Japan and Korea, or go as far as to test the native, nutritive but very simple dishes, and of a really moderate price.

Lastly, a broad range of lodging is offered there, from the luxurious hotels to the simplest but convivial guest house at reasonable price.

Here follow among so much of others are attractions which one can see in the town of Antananarivo:

Visit of the zoological and botanical gardens of Tsimbazaza: this park shelters representatives of fauna and endemic flora of Madagascar as well as a museum of paleontology and ethnology. Visit royal palace of Ambohimanga: located about 20mn from Tana on one of the large sacred hills of Antananarivo. One finds there the summer palace of queens of Madagascar with its old pieces of furniture, Andrianampoinimerina’ s royal case dated back towards 1787, showing the history, the dwelling and the way of life of an imminent King of his time. Visit of a Lemur Park, a crocodile farm, a butterfly farm . Visit of a Malagasy silk workshop the “lamba landy” . Dawdling in the crafts markets such as “artisanal market of Andravoahangy”, or “the artisanal market of the Route Digue”, these markets offer several and various articles of beauty at reasonable prices which one can bargain.